India's historic series win in Australia - how it happened 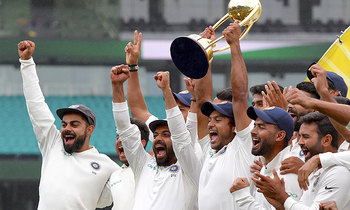 PIC: India's captain Virat Kohli (L) celebrates with teammates as they pose with the Border-Gavaskar Trophy after winning the Test series between India and Australia at the Sydney Cricket Ground on Monday. (AFP)

Virat Kohli's India on Monday won their first series in Australia since they began touring Down Under in 1947-48.

Here's how they did it:

India scored just 250 after winning the toss and batting, with the total built on the back of methodical Cheteshwar Pujara's grinding 123. Josh Hazlewood was the pick of the bowlers with 3-52.

In reply, Australia were skittled for 235 with Travis Head's 72 -- his highest Test score -- the highlight.

Pujara was again the hero for India with a dogged second innings 71 while vice-captain Ajinkya Rahane contributed 70 in their 307.

It left Australia requiring a record run chase of 323 at Adelaide Oval. They gallantly battled to 291, with Shaun Marsh knocking 60 in a tense finale. But India came out on top to win their first Test in Australia for a decade. 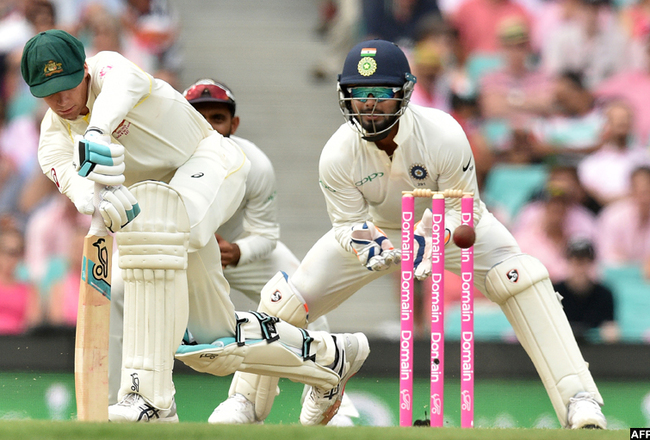 A stylish 70 from rookie opener Marcus Harris and 58 by Head helped Australia accumulate 326 in their first innings, with the last four wickets falling for just 16 runs. Paceman Ishant Sharma took 4-41.

In compiling 123, dangerman Kohli became the second-fastest player to reach 25 Test centuries in terms of innings, behind only Don Bradman. He also joined Sachin Tendulkar as the only Indian batsmen to have scored six Test centuries in Australia.

In Australia's second innings Mohammed Shami claimed a career-best 6-56, as the hosts were bowled out for 243, setting India 287 to win. Usman Khawaja top-scored with 72.

But India's batsmen failed to fire in the chase and were all out for 140, handing Australia their first Test win since the ball-tampering scandal in March.

But it was Pujara again who was the rock, making 106 in their first innings 443-7 declared. Kohli chipped in with a patient 82 as the pair wore down Australia's bowlers.

The home team's batsmen capitulated in reply, all out for 151 with the devastating Jasprit Bumrah blitzing 6-33.

India, declining to enforce the follow-on, scraped together 106-8 declared on a deteriorating pitch to set Australia an unlikely 399 -- a record chase at Melbourne -- to win. Pat Cummins took a career-best 6-27.

Despite a lively 63 from Cummins, Australia's batsmen again failed to rise to the challenge and were all out for 261 to give India a unbeatable 2-1 series lead.

Kohli again won the toss and batted on a flat wicket, with Pujara once more proving his credentials as perhaps the most reliable number three in the world as he made a stoic 193. Pant added a lively 159 not out before a declaration was called at 622 for seven.

Australia blew a strong start with yet another top-order batting collapse, and in a rain-hit Test were bowled out for 300. Opener Marcus Harris made 79 while spinner Kuldeep Yadav grabbed 5-99.

They were forced to follow on at home for the first time in 30 years. But their second innings was curtailed by bad light almost immediately, with the score at 6 for no wicket after just four overs, and the players didn't return as the entire last day was lost to rain.