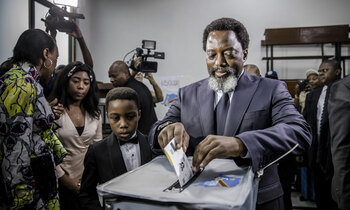 PIC: President Joseph Kabila cast his vote along with his family at the Insititut de la Gombe polling station in Kinshasa on Sunday. (AFP)

Voters in the Democratic Republic of Congo went to the polls on Sunday in elections that will shape the future of their vast, troubled country, amid fears that violence could overshadow the ballot.

Millions of electors are choosing a successor to President Joseph Kabila, who is stepping down two years after his term limit expired -- a delay that sparked bloody clashes and revived traumatic memories of past turmoil.

But analysts say the threat of violence is great, given the many organisational problems and wide-ranging suspicion of Kabila.

The election's credibility has already been strained by repeated delays, the risk of hitches on polling day and accusations that electronic voting machines will produce a rigged result. 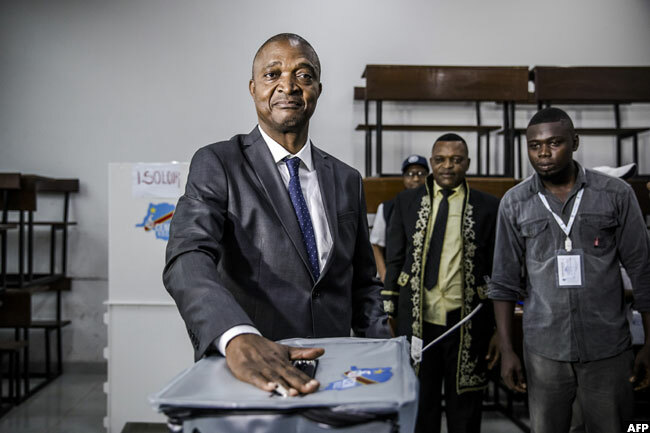 On the eve of the vote, talks between key candidates to avert post-election violence broke down.

The announcement came after the pair had met with the Independent National Election Commission (CENI) as well as Kabila's preferred successor, Emmanuel Ramazani Shadary.

The UN, the United States and Europe have loudly appealed for the elections to be free, fair and peaceful -- a call echoed on Wednesday by the presidents of Angola, Botswana, Namibia, Zambia and the neighbouring Republic of Congo. 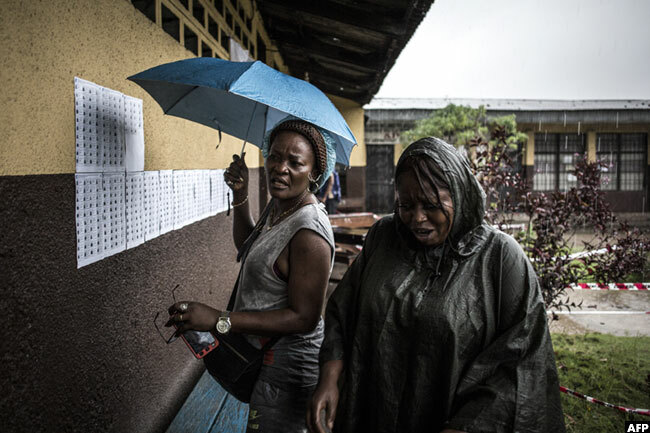 These two Congolese nationals sheltered from the rain before voting

Polling stations opened in the east of the country a little after their scheduled time of 0400 GMT and an hour later in Kinshasa and the west, with electoral officials and observers the first to cast their ballots in Lubumbashi.

"I'm excited to vote, to be able to choose at last," one 18-year-old student named Rachel told AFP.

In one polling station, electoral officials were still adjusting voting machines and in another a technician needed to restart a machine that had broken down, an AFP reporter saw.

The last polling stations are due to close at 1600 GMT.

Twenty-one candidates are contending the presidential election, which is taking place simultaneously with ballots for the national legislature and municipal bodies.

The frontrunners include Kabila's champion Shadary, a hardline former interior minister facing EU sanctions for a crackdown on protesters.

His biggest rivals are Fayulu, until recently a little-known legislator and former oil executive, and Tshisekedi, head of a veteran opposition party, the UDPS.

If the elections are "free and fair," an opposition candidate will almost certainly win, according to Jason Stearns of the Congo Research Group, based at the Center on International Cooperation at New York University. 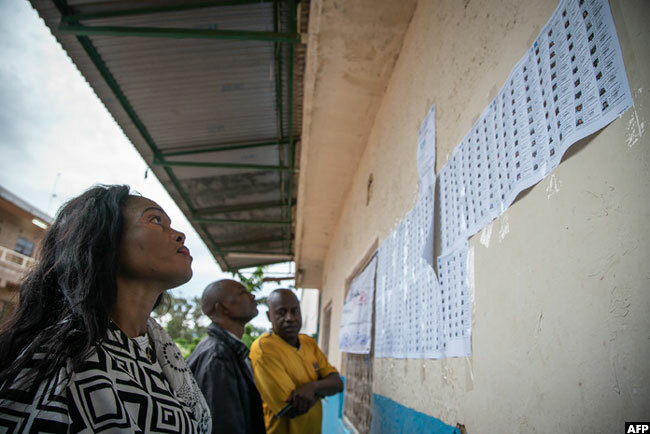 A Congolese citizen looks at a roster before voting early at a polling station set up at the Imara College in Lubumbashi, Haut-Katanga province

Opinion polls indicate Fayulu is clear favourite, garnering around 44 percent of voting intentions, followed by 24 percent for Tshisekedi and 18 percent for Shadary, he said.

However, "the potential for violence is extremely high," Stearns warned.

Between 43 and 63 percent of respondents said they would not accept the results if Shadary is declared winner, he said.

And between 43 percent and 53 percent said they did not trust DRC's courts to settle any election dispute fairly.

However, Kabila said he was confident "everything will go well on Sunday".

"I want to reassure our people that measures have been taken with the government to guarantee the safety of all sides, candidates, voters and observers alike," he said in his end-of-year address broadcast Saturday. 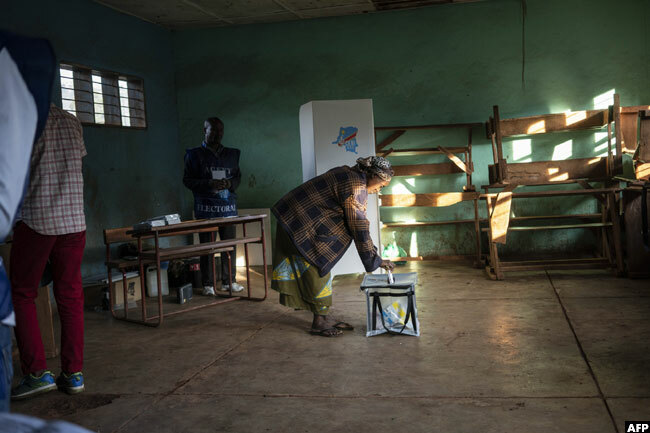 Eighty times the size of its former colonial master Belgium, the DRC covers 2.3 million square kilometres (920,000 square miles) in the middle of Africa, behind only Algeria in area on the continent.

Gold, uranium, copper, cobalt and other riches are extracted from its soil, but little of that wealth comes down to the poor.

In the last 22 years, the country has twice been a battleground for wars drawing in armies from around central and southern Africa.

The legacy of that era endures today in the DRC's eastern border region, where ruthless militias have carried out hundreds of killings.

Insecurity and an ongoing Ebola epidemic in part of North Kivu province, and communal violence in Yumbi, in the southwest of the country, prompted the authorities to postpone the elections there until March.

Kabila said the vote would take place "as soon as the situation allows it".

Around 1.25 million people, out of a national electoral roll of 40 million, are affected.

No explanation has been offered as to whether or how the delayed vote will affect the official outcome, and legal experts say the postponement is unconstitutional.

Provisional results are due on January 6.