The wonderful performance in Chiang Mai saw Uganda finish in second place overall which was historical. 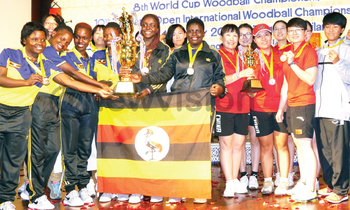 The Uganda Woodball Federation (UWbF) had less regrets and more successes stories to recount this year.

And the greatest of all since UWbF was inaugurated in 2008 was the performance the national team put up in Thailand at the Woodball World Cup.

The wonderful performance in Chiang Mai saw Uganda finish in second place overall which was historical.

The Ugandan side finished behind hosts Thailand ahead of Chinese Taipei.

To make it to second, the Ugandan team that was the only African nation at the biennial championship secured gold medal and bronze in the women category at the six-day event.

The women's team clinched gold in the Fairway contest after Sophia Namuddu, Lillian Zawedde, Joyce Nalubega and Denise Nanjeru beat their counterparts from Chinese Taipei 3-0 at the final.

They went ahead to also secure bronze in the Stroke contest behind hosts Thailand and champions Hong Kong.

On top of that, Nanjeru bagged another bronze for Uganda in the women's fairway singles contest.

She then paired with Watson Mugume and finished in third place at the mixed doubles.

In the other doubles contest, Joan Mukova and Joyce Nalubega walked away with the women's bronze as Isaac Ariho and Franco Kibuule took hold of the men's bronze.

Botladz woodball club will have to wait until February next year to make a fresh attempt to reclaim the National Woodball League men's title that went to Ndejje University this season.

Botladz lost track of the title on the final day following the 3-0 defeat against Proway.

They had earlier thumped Luzira SS and Reigners 3-0 and 2-1 respectively but this could only help them to fourth place with 33 points.

The Luwero-based Ndejje went ahead to also clinch the women's title in the eight team contest.

The team of Joan Mukoova, Pauline Nakayenga, Mariam Nampero and Elizabeth Nambeguya put the student's side to 31 points in 12 games while Ndejje Corporate and Stroke came in second and third with 29 and 27points respectively.

The return of Shamsa Nantege on the Ndejje Corporate team brought a positive impact to the Luwero based side this season at the Coral Coating National Woodball Open in Mbarara.

Nantege, who has been out of competitive woodball for over three years teamed up with Lillian Zawedde, Rose Matovu, Joyce Nalubega and Sophia Namuddu to lift their side to victory in the seniors and corporate categories.

Meanwhile, Charles Ssensalo and Claire Katusiime were also crowned the national singles champions in the men and women's categories at the two-day event at the Bishop Stiward University grounds.

Budo finished with 104 strokes to clinch the boy's title with a tally of 104 strokes while Nalinya Lwantale was the best performer in the girls category with 108 strokes.

UWbF boss Mark Kayongo is happy that this has been a fantastic season for the sport.

"We have not had a year like this one before and I would like to pay tribute to the government through National Council of Sports (NCS), the Chinese Embassy and Ndejje University for their support throughout the season," he said.

"The government gave us financial support on a number of occasions especially during the time of the World Cup," Katongo added.

The Chinese embassy helped the federation in capacity development by facilitating two courses on sports events management in China and sports medicine.

On their part, Ndejje University offered UWbF a home.

"We also started regional development programs which were a success. We went to Mbarara and the turn-up was massive this year as compared to the last edition in Jinja," says.

"We are also on track in spreading the game in Africa.

We have given support to Kenya for the national open and organized clinics in Tanzania, Rwanda and Zambia because our major prospect is to start an East Africa championship soon," he added.

Following a competitive season especially in the corporates category, a tougher 2019 season is expected.

The new year is also expected to be colourful as Uganda was awarded rights to host the Beach Woodball World Cup in March.