One of the main challenges that has always faced the concept of universal human rights is enforcement. 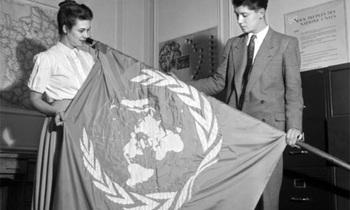 A picture released on August 20, 1948, shows employees of the Paris UN Information Office unfolding the UN flag which was to be hoisted in France for the third General Assembly of the United Nations which adopted the Universal Declaration of Human Rights, INTERCONTINENTALE/AFP

As the Universal Declaration of Human Rights turns 70, there are signs that the goals outlined in the text are facing unprecedented threats, from rising nationalism to a worldwide assault on multilateral institutions.

This week, the United Nations High Commissioner for Human Rights, Michelle Bachelet, warned that the global system "that gave teeth to the vision of the Universal Declaration is being chipped away by governments and politicians increasingly focused on narrow, nationalist interests."

But some experts have argued that as the global rights movement born after World War II comes under attack, the UDHR may have an opportunity to reassert its relevance.

The text adopted in Paris by the UN General Assembly on December 10, 1948, aimed to redress the centuries-old notion that rights are granted to citizens by states.

According to the UN rights office, this was in response to the argument of Nazi defendants at the Nuremberg trials that the leaders of a sovereign state acting in what they deemed the national interest "could not be held guilty of the newly-conceived 'crimes against humanity'."

The UDHR was therefore meant to establish the rights that belong to every person, regardless of whether they live in a democratic republic, a monarchy or a military dictatorship.

The declaration "was written for a precise moment like now when the attractions of nationalism and populism are sweeping through even democratic nations, once more," Francesca Klug, one of Britain's leading human rights scholars and the author of "A Magna Carta for All Humanity", told AFP.

One of the main challenges that has always faced the concept of universal human rights is enforcement.

A professor of human rights law at the London School of Economics, Conor Gearty, told AFP that even if the UDHR was written to establish the values that should transcend national sovereignty, it was always "states that truly mattered," because governments -- not a global entity like the UN -- had the power of enforcement.

Gearty said the notion of universal human rights saw major progress through the second half of the 20th century, including new multilateral treaties and national legislation embedding the articles of the UDHR.

Broadly, he credits the United States with leading this effort, calling human rights "the flagship of American global ascendency," in a 2017 article for the European Human Rights Law Review.

Gearty concedes that US foreign policy had always been characterised by "double standards... (and) calculated hypocrisies," but nevertheless described Washington as the "patron" of the post-war human rights era.

However, Gearty argued, that the "America First" administration of US President Donald Trump -- who has attacked multilateralism and pulled the US out of the UN Human Rights Council -- mark the end Washington's stewardship of the global rights movement.

"The US has forsaken any role as defender of international human rights, even on a hypocritical basis," he said, describing Trump's rise as the culmination of a US withdrawal that began with the so-called "war or terror" after September 11, 2001.

"The Americans have left the building," Gearty said.

At the same time he maintained that "human rights need a powerful international patron, or they will whither on the vine," and identified the European Union as "the only credible candidate" to take the mantle from Washington.

Bachelet, Chile's former president who took over as UN rights chief in September, downplayed the notion that for the Universal Declaration to remain relevant it needed support from a superpower.

She said the text would endure because "its precepts are so fundamental that they can be applied to every new dilemma," including climate change and artificial intelligence.

The 30 articles of the UDHR range from equality  rights to guarantees of a fair trial and the right to paid leave.

For its time, the text drafted by delegates from across the globe was surprisingly progressive on gender, using male pronouns only twice.

It also offers freedom from discrimination on the basis of "race, colour, sex, language, religion, political or other opinion, national or social origin, property, birth or other status."

The phrase "other status" has been applauded for anticipating the rights of LGBTI (lesbian, gay, bisexual, transgender, intersex) people, decades before they were recognised anywhere.

The UDHR "has withstood the tests of the passing years," Bachelet said.

"It is, I firmly believe, as relevant today as it was when it was adopted 70 years ago."