Bongo was flown to Morocco on Thursday from Saudi Arabia where he had been in hospital since October 24. 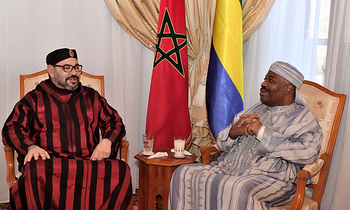 Morocco's King Mohammed VI on Monday visited Gabon's President Ali Bongo at a military hospital in Rabat where the Gabonese leader is recovering from an illness, an official source said.

During the visit, the king said he was pleased about the state of Bongo's health which he said was improving by the day, according to the Moroccan source.

Bongo thanked the king for "his warm welcome and attention" since the president's arrival in the Moroccan capital, the royal palace said.

The palace issued a handout picture of King Mohammed sitting next to Bongo who was smiling at him and dressed in a turban and djellaba robe.

The publication of the photo and the subsequent release of a video of the encounter come after persistent rumours over the health of the Gabonese president for more than a month.

Bongo was flown to Morocco on Thursday from Saudi Arabia where he had been in hospital since October 24 after falling ill at an economic forum.

After an extended period of silence, the Gabonese presidency eventually admitted last month that Bongo was "seriously ill" and had undergone surgery, but said he was on the mend.

His recovery would take weeks, or even days, a source in the presidency said last week.

A lack of official news -- along with memories of the secrecy-shrouded death of Bongo's father Omar Bongo in 2009 after decades at the helm -- had sparked numerous rumours, including speculation he was incapacitated or even dead.

The Bongo family has governed Gabon for five decades.

Ali Bongo was elected head of state after his father's death.

He was narrowly re-elected in 2016 after beating opposition challenger Jean Ping by a few thousand votes following a presidential poll marred by deadly violence and allegations of fraud.