Testifying during an inquiry probing the killing of the six people, Movement for Democratic Change (MDC) leader Nelson Chamisa said his party was not a perpetrator but rather a victim of state-sponsored violence. 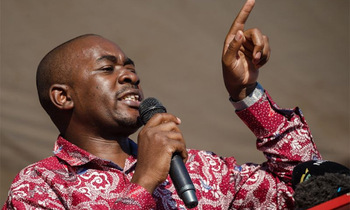 Zimbabwe's opposition leader distanced his party Monday from post-election protests on August 1 in which six people were killed and several others wounded after soldiers opened fire.

Testifying during an inquiry probing the killing of the six people, Movement for Democratic Change (MDC) leader Nelson Chamisa said his party was not a perpetrator but rather a victim of state-sponsored violence.

"History is replete with examples of how we were victims of violence," Chamisa told the commission of inquiry chaired by Kgalema Motlanthe, a former president of South Africa, denying claims that the six victims died after being attacked by MDC supporters.

"Violence has never been part of our DNA. My hands are clean. My conscience is very clear...my heart is pure. My mouth has never conspired to have a life lost on the basis of political violence. The paradox in all this is the allegations are being made by those whose hands are unclean."

The deaths occurred after protesters took to the streets accusing the country's electoral commission of delaying the announcement of results for the July 30 general election.

Chamisa denied that his party had sanctioned demonstrations on August 1 and rebuked the detaining of several opposition supporters and officials in connection with the protests.

"The people who were arrested were not demonstrators. They were members of staff who were doing parallel voter result tabulation."

Chamisa called for Mnangagwa to appear before the commission of inquiry as he was said to have deployed soldiers onto the streets on the fateful day.

Several witnesses, including relatives of the deceased, army and police commanders have given their testimonies.

Some of the relatives want the government to compensate the victims' families.

The commission has three months to complete its investigations and report back to the president.