The Post, citing anonymous sources, said the discovery was made by White House officials reviewing emails in response to a public records lawsuit. 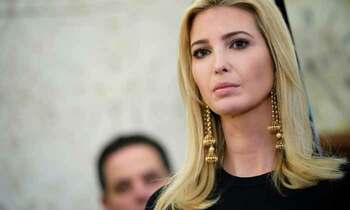 The Post, citing anonymous sources, said the discovery was made by White House officials reviewing emails in response to a public records lawsuit.

When asked about it, Trump said she was unfamiliar with details of the rules, the Post said.

A spokesman for Trump's attorney confirmed that she did use a private email account before she was informed of the rules, and said that all her government-related emails had been turned over months ago, the newspaper reported.

President Donald Trump has repeatedly pilloried Hillary Clinton, his rival in the 2016 presidential election, for her use of a private email server for government business while she was secretary of state.

Then FBI director James Comey -- fired by the president last year -- announced that the bureau would reopen an investigation into Clinton's use of the private email server just 11 days before the 2016 presidential vote, a move that some say may have helped cost her the election.

Trump supporters still chant "Lock her up!" at rallies, mimicking one of Trump's battle cries during the election campaign, indicating they believe Clinton should be jailed.