Damani's aura of invincibility plays out in Unimoni T20 Cup

After winning the Jazz Safari National 50 overs League with a 100 percent run, they have now strongly structured their efforts on the rebranded Unimoni National T20 Cup. 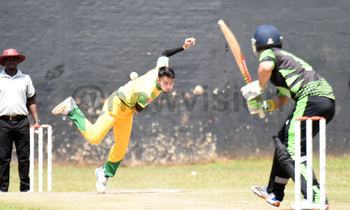 Aziz Damani's squad depth this season makes their pursuit for a double such a realistic target.

After winning the Jazz Safari National 50 overs League with a 100 percent run, they have now strongly structured their efforts on the rebranded Unimoni National T20 Cup.

Before flying out for the much anticipated ICC World Cricket League Division Three in Oman, the evergreen duo of Riazat Shah and Henry Ssenyondo had to deliver for their team in the morning game against Strikers Sunday at Lugogo oval.

Just like they never disappoint, they picked 2 wickets apiece to restrict Strikers to 90 as the latter came short in chasing the game.

Mir Afzal rather produced a match winning performance with a remarkable return of 77 Not Out from 40 balls in the 13 runs triumph. The rampant batsman was equally impressive in Damani's second 5 runs win against Kutch Tigers.

Kutchi Tigers who are last year's runner-up failed to build on their dream start to the season as Damani proved strong enough to go all the way.

At Entebbe Michael Ndiko (61 off 29 balls) and Wassim Butt (56 off 52 balls) ran riot of Avengers in a 61 runs win with half centuries. The latter is making a strong case bfor himself following a brutal 172 from 76 balls in a previous game Jinja SS.

KICC, however, lost their other game against defending champions Challengers. The latter won by a slender 1 run in a very tight game.

With sh15m invested in the rebranded Unimoni National T20 Cup, there just much more for teams to compete for.