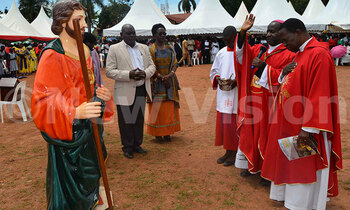 The Bishop of the Roman Catholic Diocese of Fort Portal, Dr Robert Muhiirwa Akiiki has asked Catholics in Uganda and East Africa to deepen their devotion to Saint Jude Thaddeus.

He also encouraged them to pray for the institution of the family, which he said, was being threatened by challenges like domestic violence, HIV-AIDS, poverty and ignorance.

The Prelate further asked Christian spouses to work hard and increase their household incomes for the survival and prosperity of their families. "The Church needs truly Christian marriages that are also economically empowered. I encourage parents to take greater responsibility to educate our children in schools.

You should also entice our children to do practical courses, which will make them job creators and not job seekers."

Bishop Muhiirwa was presiding over the celebrations for the Feast Day of Saint Jude Thaddeus at the National Shrine at Naggulu, in Nakawa division on Saturday.

Saint Jude Thaddeus is one of the most influential martyrs of the Catholic Church. According to the tradition of the Church, he is the saint for difficult cases.

Catholics are generally convinced that when you pray to God through his intercession, you will not fail to get what you want.

The pilgrimage on Saturday was graced by thousands of pilgrims from the various Catholic dioceses of Uganda, Kenya and Tanzania. 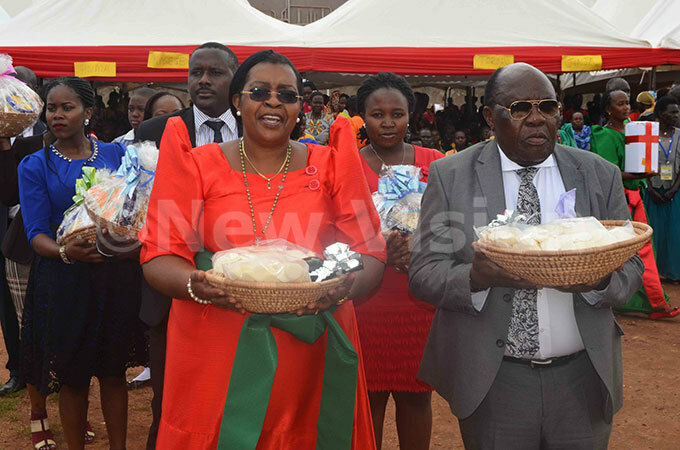 The National Director of the Devotion of Saint Jude Thaddeus, who is also the parish priest of Naggulu, Fr Godfrey Kyeyune, asked Christians to take advantage of the pilgrimage to renew their faith and trust in God.

Speaking during the same function, the Chair of the shrine's fundraising committee, Grace Kaliisa said that at least sh2.5b was needed to kick-start the construction of a new shrine, to replace the existing one that has become small and old.

"So far we have collected sh1.3b, which is not enough for us to start the work. We need another sh1b to start the project. Some of the dignitaries who graced the celebrations for the Feast Day of St Jude Thaddeus at Naggulu Shrine.Photo by Mathias Mazinga

We request all Ugandans of good will to make a contribution to this cause. We want to raise the infrastructure status of our shrine so that it measures up to the standards of the devotional shrines in Europe and the US." Kaliisa said.

There was also a fundraising function during which Muhiirwa donated sh1m towards the project of the new shrine.