Senegalese Mane bagged a brace and Egyptian Salah scored one goal and created two in a 4-1 rout of Cardiff City at Anfield. 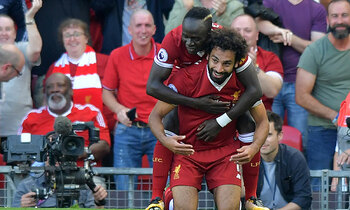 Liverpool sharpshooters Sadio Mane and Mohamed Salah and Arsenal goal poacher Pierre-Emerick Aubameyang were the top African performers in the major European leagues at the weekend.

Senegalese Mane bagged a brace and Egyptian Salah scored one goal and created two in a 4-1 rout of Cardiff City at Anfield.

Gabonese Aubameyang became joint Premier League leading scorer this season with Eden Hazard of Chelsea by notching his seventh goal for Arsenal in a 2-2 draw at Crystal Palace.

Salah and Mane showed signs they are getting back to their best form by combining for three of Liverpool's four goals to take Jurgen Klopp's men top of the Premier League with a 4-1 win over Cardiff. Salah opened the scoring with his fourth goal in a week after taking his tally for the club to 50 with a midweek double over Red Star Belgrade. Mane smashed home Liverpool's second and was then sent through by Salah to seal the points after Salah had also teed up Xherdan Shaqiri for his first Liverpool goal.

Aubameyang moved level with Eden Hazard as the Premier League's top scorer with seven goals in controversial circumstances in a 2-2 draw at Crystal Palace that snapped Arsenal's winning streak at 11. He struck after strike partner Alexandre Lacazette had handled and the goal was given with the aid of goal line technology after sneaking in by just nine millimetres.

Nigerian international Ndidi's deflected effort secured a late point for Leicester in a 1-1 draw against West Ham, but it was a tragic weekend for the Foxes as club owner Vichai Srivaddhanaprabhas was among five fatalities when his helicopter crashed in the car park of the King Power stadium after the match.

Retired Ghana international Boateng rescued a Serie A point for Sassuolo by converting an 85th-minute penalty in a 2-2 home draw with Bologna. It was the fourth goal of the league campaign for the midfielder.

Boateng was one of two African goal scorers in Sassuolo as Senegalese Mbaye put Bologna ahead for the second time on 56 minutes. It was a welcome point for Bologna as they lie fourth-last in the table.

Ghanaian Chibsah set up second-last Frosinone for a 3-0 win at SPAL by opening the scoring five minutes before half-time. It was the first Serie A victory of the season for Frosinone after two draws and seven losses.

The Algeria forward scored twice in quick succession as Hoffenheim floored 10-man VfB Stuttgart, who had defender Emiliano Insua sent off after just eight minutes and conceded four goals in just 12 second-half minutes. After a neat exchange of passes with Brazilian Joelinton, Belfodil fired home Hoffenheim's third and then mercilessly punished an error for his second goal and Hoffenheim's fourth on 60 minutes to seal the 4-0 rout.

The Ivory Coast veteran could have finished with a hat-trick after finishing off a first-half counterattack, then converting a 91st-minute penalty in a 2-2 draw at Bundesliga leaders Borussia Dortmund and having a late shot saved. The 33-year-old former Chelsea striker grabbed his first two league goals of the season as he twice equalised for Hertha after English teenager Jadon Sancho scored either side of half-time for Dortmund.

Algerian Abeid scored the second Dijon goal in a 2-2 draw at Monaco, who remain winless since former France superstar Thierry Henry was appointed coach this month. Both clubs languish among the bottom four in Ligue 1.

France-born Morocco international Alioui equalised for bottom-half Nimes in a 1-1 home draw with sixth-placed Saint-Etienne, who had taken a first-minute lead. Nimes are among four Ligue 1 clubs who have drawn five of 11 league matches this season.