Speaking at the handover ceremony of grains for the year 2017 held at Namalu prisons on Thursday in Nakapiripirit district, the minister for Karamoja affairs Dr. John Byabagambi reflected on the strategies government has undertaken to place Karamoja on the national track for transformation. 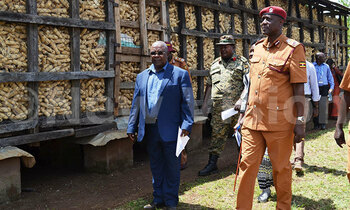 The office of the Prime minister (OPM) in collaboration with Uganda Prisons have handed over 286.2 metric tonnes of maize grain to World Food Programme  (WFP).

The latter will next year distribute the grains to schools in Karamoja under the schools feeding programme dubbed, "Karamoja feeds Karamoja."

Speaking at the handover ceremony of grains for the year 2017 held at Namalu prisons on Thursday in Nakapiripirit district, the minister for Karamoja affairs Dr. John Byabagambi reflected on the strategies government has undertaken to place Karamoja on the national track for transformation.

"Iam happy to hear that since 2015 OPM has been collaborating with WFP and Uganda prisons service in implementation of the Karamoja feed Karamoja. This translates to 20% of the maize grains in the school feeding programme," he said.

Byabagambi said his ministry was in advanced stages to ensure that acreage is increased by expanding collaboration with other prison farms in the region.

He added: "This planting season, our plan as a ministry is to increase the acreage from the current 300 to 500 acres.

Byabagambi further said the overall enrolment; retention of school is largely dependable on the availability of food in schools.

He however said latest statistics still continue to indicate that there is a slight drop in the school enrolment in most institutions.

Byabagambi called upon the local leadership in Karamoja to ensure that all school age going children attain education.

He congratulated government for placing the region under positive action.

"As I speak now government is going to construct 10 valley dams across Karamoja," he said.

The undersecretary in charge of pacification and development in OPM Ketty Lamaro said, "The project, "Karamoja feeds Karamoja" is our pride as stakeholders."

Highlighting, the history and key achievements of the project, she said in 2015, a total of 355 metric tonnes of maize grains was planted. This constituted 20% of the total meals utilised by schools in Karamoja at half ration was handed over to WFP for distribution.

She however lamented on the reduction on 2017, where only 163 metric tonnes of grain was produced on 400 acres of land.

The director of production and engineering in the Uganda prisons David Nsalasata attributed the reduction of maize grain production to crop thefts.

He added that the bad weather characterized with recent flooding also contributed to poor yield of the maize.

"The last season also the army fall worm also devastated most of our maize," Nsalasata noted.

He congratulated OPM on the support of the programme urging government to lease more land so as to be able to produce more food for schools.

Nsalasata asked the locals to desist from stealing maize from the gardens saying those arrested will be prosecuted.

"Through education the lives in Karamoja can be changed,' he said.

Uganda Prisons Services and OPM are have a partnership for production of maize grains for the plight of school children in Karamoja. The partnership that has been in existence since 2014 is a brain child of the first lady Janet Museveni.