Mutabazi explained that article 35 of the Constitution recognizes the rights of persons with disabilities and tasks the Parliament to enact appropriate laws to protect person with disabilities. 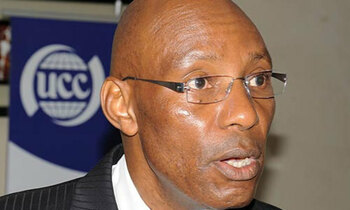 Uganda Communications Commission (UCC) will not renew licenses for TV stations without sign language and subtitles in major newscasts and programmes.

"The Commission hereby notifies all television broadcasters that effective January 1, 2019, the commission shall not renew the license of any television broadcasting operator that will not have fully complied with the statutory requirement provided under Persons with Disabilities Act, 2006," the executive director, Godfrey Mutabazi, said in a statement issued October 19, 2018.

"In exercise of its mandate to set standards, monitor and enforce compliance relating to content, provided for under the Act, the commission has repeatedly reminded all broadcasters to comply," the statement added.

Mutabazi explained that article 35 of the Constitution recognizes the rights of persons with disabilities and tasks the Parliament to enact appropriate laws to protect person with disabilities.

Mutabazi reminded the TV stations that Parliament subsequently enacted the Persons with Disabilities Act and close 21 (2) of the Act provides that any person who owns a television stations shall provide inset or subtitles in at least one major newscast programme each day and in all special national significance.

"A number of televisions stations are not complying. We cannot afford to have a section of Ugandans denied their right. We are moving in to enforce the law," Mutabazi said.

UCC is mandated to set national standards and ensure compliance with national and international obligations and investigate any matters regarding the use and provision of communication service in Uganda.

The UCC boss said Uganda Communication Act requires minimum broadcasting standards for all broadcasters to ensure that any program that is broadcast, complies with the existing law.