The detentions come after a series of prosecutions of journalists in the troubled nation, which is just two months away from tense elections to replace President Joseph Kabila. 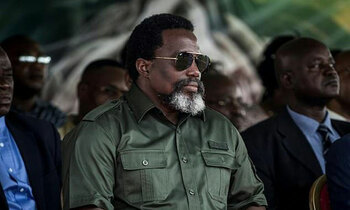 Five journalists at a newspaper in the Democratic Republic of Congo were "abducted" on Friday, their managing editor said, after the publication of articles on the misappropriation of rations for police cadets.

The detentions come after a series of prosecutions of journalists in the troubled nation, which is just two months away from tense elections to replace President Joseph Kabila.

The journalists had worked at the office of the tri-weekly newspaper overnight to finish the latest edition and were arrested on the premises.

The officers who took them did not show any documents, Kadima told AFP, adding that he had gone into hiding.

Earlier, he had written a letter to the national police chief complaining that police had conducted a "roundup" of copies of AfricaNews from newsstands.

On the front page of the current issue, the paper carried a story on an inquiry into misappropriation of police cadet rations, adding the head of the country's police academies had been summoned.

General Celestin Kanyama is under sanctions by the United States, which accused him of responsibility for a 2013-2014 police operation in which at least 50 young men and boys were reportedly killed and more than 30 others were forcibly "disappeared".

When approached by AFP over the case of the reporters, Kanyama said: "Stop your bullshit. Do not quote me over things I know nothing about."

DR Congo ranks 154th out of 180 countries on the Reporters Without Borders press freedoms index.

The media freedom group on Wednesday sounded the alarm over the case of reporter Sylvanie Kiaku, of the weekly La Percee, who has been detained for more than a week on charges of defamation, over two articles she wrote about redundancies at a local bank.

At the time it urged the authorities to release Kiaku pending trial and amend legislation "in order to guarantee the right of journalists to freely report the facts and expose abuses without fear of reprisals".