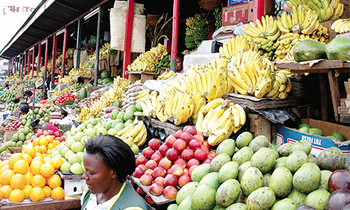 Karamoja
The Food and Agriculture Organisation (FAO), together with the Government and partners, will hold celebrations to mark World Food Day, today at Nabuin Zonal Agricultural Research and Development Institute (Nabuin ZARDI), located on Lorengdwat Road in Nabilatuk district, which was carved out of Nakapiripirit district recently. The chief guest is expected to be President Yoweri Museveni.

Having Karamoja host the event is significant for various reasons. According to hunger and food security reports, Karamoja has always lagged behind in food security. However, in the last few years, there has been remarkable improvements in food production.

"There are now visible crop farms in many parts of Karamoja. Many years ago, all you saw were livestock," Joseph Sonic Lomonyang, Moroto district chairperson says.

But still, he points out that the region still needs food assistance. Certainly, hosting the World Food Day in Karamoja can help advance both the crop growing and direct food assistance.

Although, according to the State of Food Security and Nutrition report 2018, there have been some gains in enhancing food security over the years, global challenges, such as conflict, extreme weather due to climate change, under-nutrition, increasing cases of obesity and under-nutrition are reversing progress made in the fight against hunger and malnutrition. CLICK HERE for more on this story

Cassava: The next generation crop

Cassava will be the industrial raw material for the next 20-30 years, according to Prof. Otim- Nape.

It is called the food of the poor because of its multiple food sources. The roots are cooked and eaten in pieces, the leaves make vegetates and the stem produces firewood that can be used to cook the roots.

However, cassava is moving from just being a food crop to a commercial crop and farmers are cashing in, especially in northern Uganda. "There is no looking back. Cassava is needed for making drugs and fuel.

There is cassava flour for making cakes and brewing beer," Otim-Nape, who is also the chairperson and chief executive officer of the Africa Innovations Institute, says.

Background
Since its introduction over 120 years ago, cassava was quickly adopted and its production expanded rapidly.

By 2040, cassava will be turning 142 years in Uganda. According to the Ministry of Agriculture Animal Industry and Fisheries (MAAIF) strategy under the National Development Plan II (NDPII), cassava is one of the 12 selected crops to help fight hunger and create wealth as the country pushes her quest to achieve Vision 2040.

This is because of its ability to survive extreme conditions. According to the Food and Agriculture Organisation (FAO), the leading cassava producing areas in Uganda are the eastern 37%, northern 34%, Bunyoro 15% and the central region 14%.

However, overall, the crop is grown by at least 75% of small holder farmers in the country. Otim-Nape says one of the veteran plant scientists with experience in cassava research, cassava cultivation increased greatly during the outbreak of the tropical migratory locust from 1931 to 1933.

"It became clear that cassava could withstand attacks from locusts compared to other crops and this is why many people started growing it," he says. Other records also show that further growing the crop increased after the droughts of 1939 and 1941. CLICK HERE for more on this story

In 2016, there were around 804 million people facing chronic food deprivation across the world.

That number increased to 821 million people last year. According to the Food and Agriculture Organisation (FAO), State of Food Security and Nutrition in the World report, for a third year in a row, hunger is on the rise.

October 16 marks World Food Day, dedicated to tackling global hunger. People from around the world, come together to declare their commitment to eradicating worldwide hunger.

The report says persistent instability in conflict-ridden regions, adverse climate events in many regions of the world and economic slowdowns have affected the more peaceful regions and worsened the food security.

Africa remains the continent with the highest prevalence of undernourishment. The report also says almost 21% of the population (more than 256 million people) is affected by undernourishment.