"Once elected, the Members of Parliament should start thinking in terms of a broader constituency" 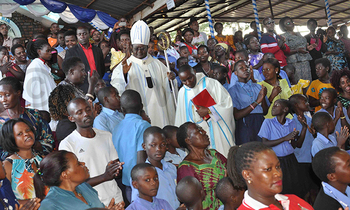 Archbishop of Kampala Archdiocese, Dr Cyprian Kizito Lwanga has urged Ugandan legislators to stop neglecting their voters' views, but to always go back and consult them before they decide on issues of national importance.

Lwanga reminded the legislators that they were not voted into Parliament to represent their own interests, but the views of the people who elected them so that they could deliver their views to the Government and the nation at large.

"Before passing bills into law or anything else of national importance, always first consult your electorate for public opinion and not for your own interest as individual Members of Parliament, particularly on issues that concern the welfare of all irrespective their belief, politically or otherwise," Archbishop Lwanga said.

Lwanga made the call on Monday while addressing hundreds of Christians during a holy mass as he launched the month of rosary that started on October 1 at Queen of Peace Shrine Church, Kiwamirembe in Wakiso district.

He said that it was deplorable to see that some legislators forget their electorates during their terms in Parliament and only remember them when they are soliciting for votes.

He noted that it is incumbent upon the MPs as representatives of the people, whether they elected them or not, to give voters a chance to give them their views concerning their welfare and on issues of national importance.

"Once elected, the Members of Parliament should start thinking in terms of a broader constituency for betterment of all citizens of our country," Lwanga said.

The prelate noted with great dismay that many bad acts that include murder, robberies, corruption, practicing witchcraft and all sorts of criminal acts are currently happening because many people have turned deaf ears to the word of God.

He urged Catholics to strictly observe months of rosary, May and October, by reciting the rosary in honour of the Virgin Mary, imploring her to intercede for them.

Lwanga said that Pope Pius XII solidified May as a particularly Marian month when he instituted the feast of the Queenship of Mary on May 31, as part of the Marian Year in 1945.

"In October 1571, the Church in Europe faced a seemingly hopeless challenge. The Muslim Turks had already conquered the Middle East, slaughtering millions and forcing the survivors to convert to Islam. They then moved across the Mediterranean Sea, taking the crucial islands of Crete and Cyprus. From these islands, they set their sights on the Christian kingdoms of the central Mediterranean, threatening Sicily, Venice, and even Rome herself." Lwanga explained.

He added that Pope Pius V called on the Christian princes of Europe to rally to defeat the Islamic threat. In addition, he called on rosary confraternities in Rome and all over Europe to undertake special processions and public recitation of the Rosary, asking the Blessed Mother to intercede for them.

Christians all over Europe prayed for Our Lady's intercession as the Turks surrounded the Christian ships. But, the European fleet broke through. By days' end, almost all of the Turks were driven ashore or drowned and; Europe was saved. Pope Pius established an annual commemoration to honour Our Lady of Victory, and his successor, Gregory XIII, decreed that the first Sunday in October would be the feast of the Holy Rosary." Lwanga narrated to a large congregation.

He assured the congregation that the Virgin Mary does not forsake those who call upon her for her intercession and as such, he urged the parents to raise their children in strong faith and always call upon the Virgin Mary to intercede for them.