5000 bibanja holders to get certificates of occupancy

Obbo said there have been many wrangles between bibanja holders and landlords in the districts of Mubende, Kassanda and Mityana. 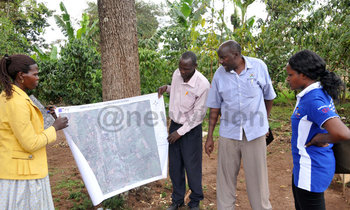 The Government is to issue certificates of occupancy to over 5000 bibanja holders in Myanzi sub-county, Kassanda district under the Improvement of Land Governance in Uganda to Increase Productivity of Small Scale Farmers on Private Mailo-Land (ILGU) project.

The project supported by the European Union(EU) and the German government is being implemented by Deutsche Gesellschaft fur lnternationale  Zusammenarbeit(GIZ), in partnership with the Ministry of Lands, Housing and Urban Development. The move aims at addressing land conflicts in Kassanda district.

The ministry's spokesperson, Dennis Obbo said there have been many wrangles between bibanja holders and landlords in the districts of Mubende, Kassanda and Mityana.

He was on a monitoring and sensitisation tour of the Myanzi sub-county, on Saturday.

He said the project is being implemented in the three districts of Kassanda, Mityana and Mubende.

The project team leader,GIZ, Horsten Hubergiz said the project involves mapping of parcels (Bibanja) for the willing bibanja holders with consent of their landlords and conflict resolution of new emerging cases.

The LCIII chairperson, Myanzi bub-county, Joseph Nsubuga said they have many land wrangles including illegal evictions.

He said under the arrangement, people are required to pay a modest fee of sh10, 000 to apply for the issuance of the certificate.

Nsubuga said bibanja holders and landlords who were initially hostile were sensitised and they welcomed the project.

He stressed that the project has helped to reduce on the cases of illegal eviction and wrangles.

He explained that some landlords did not know the value of land on which some of their tenants were occupying until mapping was started and boundaries were drawn.

Nsubuga stressed that certificates will prove ownership and protect the bibanja owners from illegal evictions without compensation.

Evaristo Kiryowa,70, a paralegal from Myanzi Parish, said the project has helped many squatters who have been occupying land for over 20 years to know theirlandlord and even start paying ground rate (busuulu).