Infantino has 'support of Africa' in FIFA re-election bid

The next presidential election will be held in Paris in June 2019 and Infantino has said he will stand. 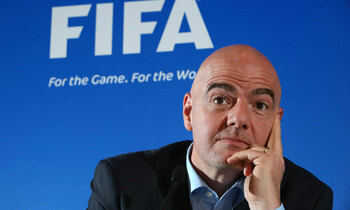 African nations would support Gianni Infantino for re-election as FIFA president, the head of the continental football federation Ahmad Ahmad said on Sunday.

"I feel it is my duty... to announce this support from Africa," Ahmad said at a special meeting of the Confederation of African Football Executive Committee, which Infantino attended, in Sharm el-Sheikh, Egypt.

Infantino, a former deputy head of UEFA, was first elected in 2016 to succeed Sepp Blatter, when the scandal that engulfed the governing body of world football was at its height.

The next presidential election will be held in Paris in June 2019 and Infantino has said he will stand.

Infantino expressed his gratitude for the African backing.

"It means a lot to me," said the Swiss. "Since long before my election, I had said, and since I have done everything, to make sure that the future really is Africa."

Infantino is believed to have supported Ahmad when he ousted the long-time CAF president Issa Hayatou in March 2017.

Infantino described the election as a "vote of change".

"It's about taking football forward, it's about making progress together," Infantino told CAF delegates, calling for "a real impact."

Ahmad said that despite the failure of African nations during the World Cup in Russia, where none of the five African nations made it to the last 16, the continent needed "regular and increased" participation.

Ahmad said that participation (in the World Cup) "stabilises some of the national teams of our continent... and gives them experience."