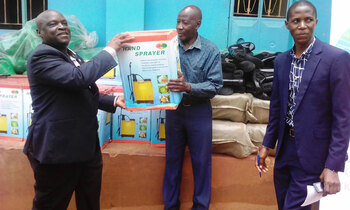 In his communication through the Wakiso RDC, Maj. David Matovu, Ssekandi said schemes aimed at transforming the communities, especially the youth by government and the Korea government should embraced.

He was addressing the youth from Kalambi SMU Community Initiative at Summer Junior Primary School, Kasasa parish in Wakiso district on September 12 at a function where KOICA donated farming inputs to the members.

Ssekandi noted that it was timely for the Korea government to address poverty related challenges among the youth and communities.

He appreciated the Korea government support to Uganda in the areas of health, Education and Agriculture, especially in rural development.

Maj. Matovu said the government has invested close to sh2b towards the youth in Wakiso district through the Youth Livehood Program (YLP) since 2014 and some of the beneficiaries have wasted the opportunity.

He said the youth have not been adequately prepared to effectively utilize the funds and the enterprise management.

Maj Matovu said President Museveni has been prompted to intervene and roll out special scheme for the youth starting with Kampala and some areas of Wakiso by equipping them with vocation skills and tools.

He said Kireka and Maganjo areas are among the area where President Museveni will empower. He regretted that in some areas the Community Development Officers
(CDO) would hurriedly engage the youth to form groups and enterprises and they access funding.

"Because of ill preparation, the groups first withdraw sh1m to party and the balance gradually perishes without any impact," he said. He warned the youth to stop messing up government programs geared at fighting poverty. He said they should ensure that they benefit from Operation Wealth Creation and YLP.

Maj. Matovu said alcoholism and marijuana have crippled the progress of many youth in rural and urban areas because they are not guided. "We still have a lot to do to shape the hopeless youth so that they do not get wasted. We must do close follow up initiatives to transform them," he said.

He noted that saving culture must be promoted in homes as a solution to poverty and Gender Based Violence. He thanked KOICA for promoting sanitation standards in homes that will help to prevent to the disease burden.  He said homes must have toilets and hand washing facilities.

The Country Director KOICA,Jun Young Suk said  the Korea government has increased funding for the development of Uganda through income improvement, Agriculture and education ,health and  other critical sectors of the economy.

KOICA has a total of 21 on-going projects in Uganda which include the establishment of the National Farmers Leadership Centre (NFLC), Fruit processing Factory in Mpigi and Soroti district respectively.

Establishment of Saemaul Model Villages and agro-processing and marketing strategy in Mpigi district are among other rural development programs funded by the Korea government.

Community members and the model village programs that have benefited from the trainings in Korea and Uganda raised the revival of cooperatives a key development that will strengthen the initiatives to improve their Agriculture production and incomes.

The members led by the Kalambi Community Initiative Erisa Mugabi noted that the falling maize prices and lack of stores to keep the maize is frustrating the farmers.  "We need to have established granaries and stores for our produce any case of price fluctuations crisis," he said.

The KOICA Club President, Samuel Mpima said the establishment of a strong cooperative organization is among the priorities under their five year development strategy.

He cited that Kalangala and Buvuma oil palm out grower's cooperatives, which are vibrant and supportive on critical concerns regarding the farmers and prices.

He said the exploitation of farmers can be controlled through the revival of cooperatives. "It's not easy to go to Bushenyi today and you exploit banana plantation farmers," he said.