The DRC, previously known as Zaire, has never had a peaceful transition of power since it gained independence from Belgium in 1960 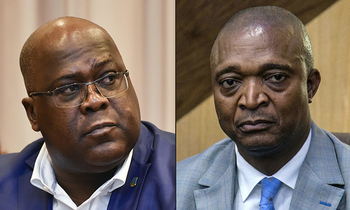 "Now we have finished with the candidacy stage, we are in the home stretch for the December 23 elections," said electoral commission chief Corneille Nangaa as he unveiled the list.

More than two dozen people registered their bid with the Independent National Electoral Commission (CENI), a much-contested panel tasked with overseeing the ballot in one of the Africa's biggest and most unstable nations.

It gave the green light to opposition figures Felix Tshisekedi and Vital Kamerhe, as well as to Emmanuel Ramazani Shadary, a hardline former interior minister backed by President Joseph Kabila.

But the list also confirmed the exclusion of former warlord Jean-Pierre Bemba and regional baron Moise Katumbi -- a move that raised howls of protest from their powerful blocs of supporters.

Bemba has lashed what he calls a "parody of an election."

He accused Kabila -- whom critics characterise as corrupt and manipulative -- of pulling strings "to ensure that the government's candidate does not have a serious challenger."

The DRC, previously known as Zaire, has never had a peaceful transition of power since it gained independence from Belgium in 1960.

Most of its citizens are deeply poor despite the DRC's wealth of gold, diamonds, copper, cobalt, uranium and oil. Bloody conflicts trouble the vast country's east and centre.

Kabila, 47, has been in power since 2001. His second and final term in office ended nearly two years ago, but he kept in power thanks to a caretaker clause in the constitution.

Months of feverish speculation about Kabila's plans, marked by protests that were bloodily repressed, ended in August when he threw his weight behind Shadary.

Around 500 people gathered in Kinshasa's Roman Catholic cathedral late Wednesday for a mass to commemorate "martyrs" who died in anti-Kabila protests in 2016.

Voting day on December 23 will take place for the presidency, legislature and provincial bodies, throwing down a huge logistical and technical challenge to CENI in a country where infrastructure is poor.

The big challenge for the fragmented opposition is to unite behind a credible candidate after the loss of the people-pulling power of Bemba and Katumbi.

It will stage a rally in Kinshasa on September 29 on the heels of talks in Brussels and a meeting in Johannesburg with South Africa's ruling African National Congress (ANC) party.

In the absence of a single champion, boycotting the election, citing for example security concerns over electronic voting machines, may loom as an opposition strategy, say analysts.

Last week, Tshisekedi, Kamerhe, Bemba and Katumbi joined with two fellow opposition leaders to warn CENI and Kabila's government to ensure fair elections or else "be held responsible for the chaos and consequences."

Bemba, 55, a former rebel and ex-vice president, declared his candidacy when he made a triumphant return home from Belgium after the International Criminal Court in The Hague acquitted him of war crimes charges.

But he was excluded by CENI, in a decision upheld by the Constitutional Court, on the grounds that the ICC had convicted him separately on charges of tampering with witnesses at his war-crimes trial.

That conviction and a one-year sentence were upheld by the ICC on Monday along with a 300,000-euro ($350,000) fine. Bemba's lawyer, Melinda Taylor, said in an email to AFP on Wednesday that he would file an appeal.

Katumbi, 53, a former Kabila ally and ex-governor of the mineral-rich province of Katanga, says he was blocked at the Zambian border to prevent him from returning to the country to file his candidacy.