After her practice round 75 gross, Eaton who is gunning for her fourth Uganda Ladies Open title said she was here to win the championship. 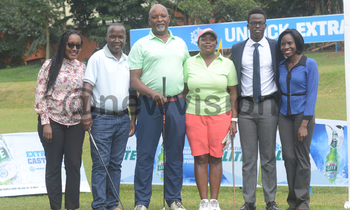 Tanzanian Angel Eaton has vowed to defend her Uganda Ladies Golf Open title in the tournament that started Thursday at Entebbe Club.

After her practice round 75 gross, Eaton who is gunning for her fourth Uganda Ladies Open title said she was here to win the championship.

"I'm here to try and win it again but the course is long and tough," Eaton said.

But Uganda Lady Golf Union president Eva Magala expects a Ugandan to wrestle the Castle Lite title from the Tanzanian.

Magala who alongside Irene Nakalembe are the front runners in the 54-hole competition said after the official tee off on Wednesday that they expect one of the Ugandans including herself to ride on home advantage to win the 68th edition of the tournament.

"Our chances of winning it are high; we have Nakalembe and me playing on our home course so it is ours to lose. This course has its own challenges, it is a long course but it is good the trophy stays here; but may the best player win it," Magala stated.

Eaton will be hoping to replicate her 2013 performance when she won her second Uganda ladies title at Entebbe Club. Then, she beat Flavia Namakula who finished second by 8 strokes, with Eva Magala, Irene Nakalembe and her compatriot Hawa Wanyeche finishing third, fourth and fifth respectively.

The first time she won in 2012, she led a 1, 2, 3 finish for the Tanzanians who had Iddi Madina and Hawa Wanyeche tying for second place.

The tournament was officially teed-off by Nile Breweries Entebbe region sales manager William Akankwasa who was in the company of other co-sponsors representatives Leah Namuleme and Tendo Kafeero from cba, Martha Arinaitwe from Ernest and Young as well as tournament director John Katto and UGU president Innocent Kihika.

"We are proud to be part of this event and we are committed to ensure the tournament goes on very well. Castle Lite is going to be offered at discounted prices during this event so we expect an exciting tournament," Akankwasa said.

Tournament director John Katto said the course was in its best shape and welcomed all golfers and spectators to Entebbe while Kihika thanked the sponsors and promised an exciting three weeks of golf.

Uganda golfers have over the past ten years won it six times with Flavia Namakula who is now a professional golfer having won it a record five times.

Other Ugandans like Harriet Kitaka, Gloria Mbaguta, Martha Babirye, Peace Kabasweka, Evelyn Asiimwe, Judith Komugisha and Resty Nalutaaya are searching for their first title and are up against a strong field of foreign and other local entrants.

Past winners over ten years