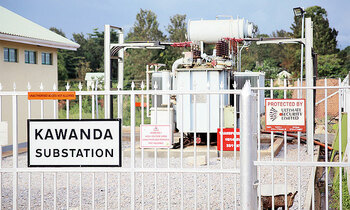 With the improvements in the performance of the economy, Umeme, the power utility, projects an increase in electricity demand over the period.

In a bid to improve the power distribution network in Uganda and in readiness for extra generation capacities in Karuma (600MW) and Isimba (183MW), Umeme has so far invested more than sh1.8 trillion in upgrading its system.

Over the past 12 years, Umeme's investments in the distribution infrastructure has led to the doubling of the physical infrastructure, improved efficiencies, tripling of customer connections, supply reliability and improved customer service.

Selestino Babungi, the managing director, says since the company took over from Uganda Electricity Board in 2005, the power distribution company has been focusing on restoration and expansion of the grid, reduction in energy losses and improvement in efficiencies.

Also to rollout of prepaid metering, connections of new customers to the grid, improving public safety, improved service delivery and reliability of supply. The impact of the investments is evident in the performance of the distribution sector and general electricity sector in Uganda.

Some of the key projects that were executed include the construction of a 40 MVA Moniko substation in Lugazi and Mbalala, completion of Namugongo integration lines, GetFit mini hydro project integration lines, upgrade of Lugogo to Kibuli lines, refurbishment of lines in Kabale, Mukono and Pallisa, rollout of prepaid metering and upgrading of Namanve Industrial Park, conversion of the government accounts to prepaid metering and the upgrade of power transformers.

"The focus will continue to be on growth and efficiency-related projects in readiness for the upcoming generation capacity," says Babungi (pictured left).

"What this means is that the government does not now need to allocate cash for the distribution network infrastructure development," Babungi explains.

He says this is being done by Umeme, allow the government to relocate its scarce resources to other key sectors in health, education and the transport infrastructure development network.

Uganda's electricity sector model is being replicated across other countries. There is optimism in relation to what was delivered in the past. It is worth noting that Umeme has the capabilities and platform to deliver the future.

The current state of the electricity sector in Uganda, requires significant investments in tandem with projected growth in generation.

"Our next investment cycle of 2018—2021 prioritises network growth-related capital investments on the back of the expected increase in power supply and the country's industrialisation drive," Babungi says.

He adds that the additional capital requires a new financing structure and strategy, which are a priority for 2018.

This is coupled with the delivery of the 2017 regulatory targets on energy losses, which closed at 17.2% from 19% in 2016, collections, which stood at an average of 102% and operating efficiency, which stood at 83%, while executing the network investment plan.

With the improvements in the performance of the economy, the power utility company projects an increase in electricity demand over the period.

This is one of the key reason that the generators and funders at the Bujagali, Karuma and Isimba dams insisted that Umeme become co-signatories to the loan agreements because of its excellent ability in bill collections and timely payments to the Uganda Electricity Transmission Company Limited, which it terms remits it to the generators.

Up to 75% of Umeme's revenue collections go to UETCL for the payment of the various generating companies.

The company is also looking at the pricing of the power that is coming upstream in the next few years, stimulating demand for excess generated power, new generation, grid build up, access and investment needs to be able to utility the over 2,000MW of electricity is set to be added onto the grid in the next few years.

"We recognise that the upcoming period requires further significant investments in grid expansion. The government ambition of increasing electricity penetration from current 23% (of which 16% is on the grid) to 40% of households by 2025, coupled with the projected increase in effective generation capacity from the current 650MW to over 1,600MV by 2020, underlines the urgency for investments in the distribution network," he says.

Babungi says they estimate an investment of $1.5b (sh5.4 trillion) over a 10-year period to achieve the government objective.

Mobilisation and deployment of this capital shall be an important work stream for the company over the coming period. Continuous investment in the grid ensures its efficiency, reliability, safety and ability to evacuate and distribute increased generation capacity.