'Several injured' after truck rams into wall at Karuma

The worker carrier truck was transporting workers into one of the tunnels at the site. 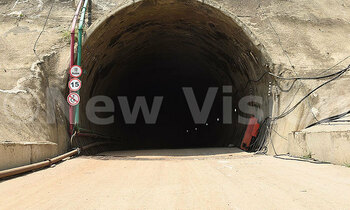 PIC: At the entrance of a tunnel at Karuma. (File photo by Richard Sanya)

KIRYANDONGO - Several people are reported to have been injured after a truck transporting workers rammed into a wall at the Karuma hydropower project.

"No fatalities have been recorded," UEGCL, the government agency implementing the Karuma hydro power project, said in a statement Friday.

The workers, according to UEGCL, were being transported for the evening shift when the worker carrier truck rammed into the side wall and eventually overturned.

They were moving into one of the tunnels.

All the injured are said to have been transfered to Lacor and Gulu Independent Hospitals for medical attention.

"We are verifying the identity of the injured with available official records and traffic Police are conducting investigations into the likely cause of the accident," UEGCL said, adding that they would release a "more comprehensive report" on what happened.

"We regret the accident and reiterate our unwavering quest for a safe working environment for all."

With a planned capacity of 600MW, the near-complete Karuma hydropower project is located on the Kyoga Nile River in Kiryandongo district.

The project features a dam that is 14m high and 314m long.

It also has an underground power house, transformer cavern and surge chamber. The water conductor system comprises a 25km network of tunnels.