In transit countries like Tunisia, migrants conceal all information about themselves to avoid being sent back to their country. 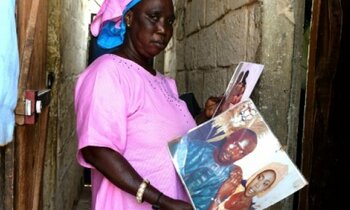 NDIEBENE-GANDIOL - In 2006, Khady Dieye's husband left the family home on Senegal's northern coast and boarded a dugout canoe in the hope of reaching Spain.

"Since then, we have not had any news of him," said Dieye, who lives in the small fishing village of Ndiebene-Gandiol near Saint-Louis.

Like many other would-be migrants, he disappeared, leaving his family not knowing whether he was dead or alive, stuck between hope and grief.

With thousands of migrants dying at sea every year across the globe, European and African governments are struggling to keep up with the deaths and identify the bodies, experts told AFP.

Despite close collaboration with the police and firemen, "there are always bodies we are not able to identify," Sow told AFP.

So families like Dieye's go through the mourning process anyway, observing the proper rituals in this Muslim-majority country.

"We said the Koran and gave the alms five months later," added the 50-year-old, who lives with her four children on a small plot of land.

Dieye heads a support group for families of missing migrants with the help of the International Committee of the Red Cross (ICRC), which posts their pictures online to help with the search.

Another villager, Safietou Ndiaye, said it took her family seven months to accept the probable death of her brother in 2006.

But not all families manage to do so.

"Some keep the hope that their relatives are still alive," Ndieye said.

Earlier this month, a canoe carrying 150 would-be migrants from The Gambia ran aground in Dakar, the Atlantic port city and capital of Senegal.

Similar incidents have multiplied on the coast of Senegal and Mauritania in recent months sometimes with tragic outcomes.

And rescuing victims from the sea can make identification much harder because "bodies which have been taken out of the water have often started rotting," a security official in Saint-Louis told AFP.

In such cases, they are buried on the beach, he said.

Across the globe, the number of migrants who have died at sea is "enormous" but the rate at which they are identified remains "very low," said Jose Baraybar, a Paris-based forensic expert who works for the International Committee of the Red Cross and was addressing a meeting in Dakar.

So local residents have teamed up to do their own investigations.

"We discuss the disappeared, how to identify them from their clothes, watches, faces, identity papers," Dieye told AFP, saying her village was working with people from another village near Dakar.
Lucky charms

When two local boys died at sea in April, their relatives recognised them through the clothes and lucky charms they were wearing, Ndiebene-Gandiol's mayor said.

And in the neighbouring village of Pilote-Bar, bracelets and rings were found on corpses which helped with identification, according to Issa Wade, who heads another support group for the families of missing migrants.

But it gets significantly harder when the deaths occur hundreds or even thousands of miles away.

"The main issue is having information about the victims before they die," explained Baraybar.

The puzzle continues for forensic experts in places like Greece or Italy, when bodies are found in the Mediterranean.

In transit countries like Tunisia, "migrants conceal all information about themselves to avoid being sent back to their country" if arrested, said Moncef Hamdoun, who heads the forensic department at Charles-Nicolle hospital in Tunis.

"We have a database for Tunisians," but not for people from elsewhere, he said.

And when bodies end up in the sea, pictures are of little use, he said. arriving at the Mugaba palace which is under construction.