Kayihura back in court for bail hearing 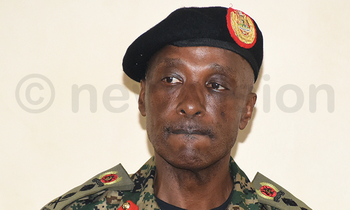 The army court is today expected to hear a bail application filed by the former Inspector General of Police, Gen. Kale Kayihura.

Kayihura was last Friday arraigned before the General Court Martial (GCM) in Makindye and charged with two counts of failure to protect war materials and one of aiding the kidnap and illegal repatriation of Rwandan nationals.

The charge of failure to protect war material attracts a maximum penalty of death, on conviction while aiding or abetting kidnapping 10-years-imprisonment.

Prosecution led by Maj Raphael Mugisha alleges that Kayihura between 2010 and 2018 on various occasions allowed the use of arms to unauthorised persons to with members of Boda Boda 2010. The group is led by Abdullah Kitatta, who together with others, is facing charges of illegal possession of army equipment in the same court.

All the unit commanders have since been arrested and are detained in Makindye military barracks apart from Jonathan Baroza, who led WPU. Baroza abandoned his duty station in Algeria and he has since fled to an unknown destination.

The other unit commanders arrested are; Herbert Muhangi (FSU), Nickson Agasirwe (SOU) and Lt. Col. Ndahura Atwooki (DCI). All of these officers have since been replaced.

Earlier, seven policemen, including two senior officers, were charged at the army court with kidnapping and repatriating Mutabazi and Kalemera back to Rwanda.

The policemen were charged alongside a Rwandan army officer, Rene Rutagungira and a Congolese, Pacifique Bahati Mugenga alias Ilunga Monga. They also denied the charges.