The death toll rose by 10 overnight and the state official said it was expected to go higher during the day. 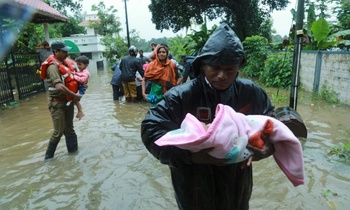 PIC: Thousands of kilometres (miles) of roads and hundreds of homes have been damaged or destroyed by floods that have ravaged Kerala during the monsoon. (AFP)

Over 60,000 people have now entered relief camps and the army and navy have stepped up rescue operations in the southern state, using a helicopter to airlift people, a Kerala disaster management official said.

"All districts are under red alert as more rains are expected in the next 24 hours," the official added.

The death toll rose by 10 overnight and the state official said it was expected to go higher during the day.

Flights, train and metro services have been suspended in the flood-ravaged state. hundreds of villages have been inundated, with more than 10,000 kilometres (6,200 miles) of roads and thousands of homes destroyed or damaged by the floods.

Kerala, famed for its pristine palm-lined beaches and tea plantations, is battered by the monsoon every year but this year's damage is the worst in decades.

Prime Minister Narendra Modi said Thursday on Twitter that he has ordered the Defence Ministry "to further step up the rescue and relief operations across the state. Praying for the safety and well-being of the people of Kerala."