"Investigations should dig deeper to establish whether there was pre-planned attack on the person of the president," Osinde said. 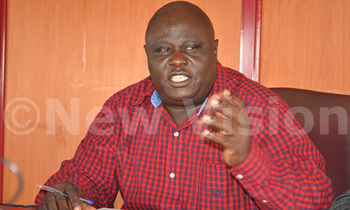 KAMPALA - The Uganda People's Congress party (UPC), has demanded for thorough investigations into the violence that occured as election campaigns for Arua Municipality parliamentary by-elections concluded on Monday.

The violence that claimed the life of Kyandondo East MP, Robert Kyagulanyi aka Bobi Wine's driver, Yasin Kawuma errupted when the purported supporters of one of the candidates, Kassiono Wadri violently attacked the President's Motorcade.

President Yoweri Museveni had been in Arua to campaign for the NRM candidate, Nusura Tiperu.

Kawuma was shot dead during the alleged violence that spruted in Arua Municipality on Monday.

Arua Municipality Parliamentary seat fell vacant after MP, Col.Ibrahim Abriga was shot dead on June 8, together with his body guard and brother, Sayid Kongo Buga by masked men ridding on the boda boda as he returned to his home in Kawanda Wakiso district.

While addressing the weekly party press conference held at the party headquarters at Uganda House in Kampala, the party spokesperson, Micheal Osinde said; "Though supporters are sometimes violent, we call upon the security agencies to make thorough investigations and know which camp caused chaos."

Osinde added: "Investigations should dig deeper to establish whether there was pre-planned attack on the person of the president.

"It is possible that wrong people may be targeted while the goons that were involved in the act are left to go scot-free.

"However, it is unfortunate if it is true that the president was attacked."

He added; "Our concern is that up to now that these people are yet to be arraigned and court and charged.

"Though we appreciate that security parameters should be given time to investigate the matter, human rights should be upheld in any situation."

The party also condemned the attack on journalists during the scuffle noting that this infringed on the press freedom and expression.

"We call on the security agencies to come up with the vivid report of what exactly happened and name any journalist who was found throwing stones to deserve the torture they went through," Osinde said.

However, the party retaliated that those who involve in violence donned in the red colour attires, the parties' symbolic colour, risk the wrath of the party that may involve dragging them to court.

"We appreciate them for using our red colour because they recognised the choice of the late Obote, however when these people use this colour for their own selfish motives, without our consent, UPC has to show concern," he said.

He added that UPC does not front violence but believes in the dialogue retaliating the need for national dialogue to solve of the outstanding issues including the elections.

The party also decried individualistic decisions by some opposition players that have resulted into diplomatic embarrassment.

Osinde demanded that opposition should hold dialogue to facilitate refocusing to the strategic mission of taking state power than pushing for individualistic interests.

"Opposition should improve communication and collaboration other than think that opposition is FDC or any other group," he said.