Families of soldiers who took part in the lightning Allied advance, which smashed German defences and morale, have travelled to Amiens from across the world for the ceremony in the city's magnificent medieval gothic cathedral. PIC: Britain's Prime Minister Theresa May and Prince William will take part in a ceremony marking the centenary of the Battle of Amiens, which marked the beginning of the end of World War I. (AFP)
WORLD WAR I CENTENARY
Theresa May and Prince William at The Tyne Cot Commonwealth War Graves Cemetery in Zonnebeke, Belgium last year, where they attended the commemorations for the 100th anniversary of the Battle of Passchendaele
Theresa May, Prince William mark centenary of key World War 1 battle
Britain's Prince William and Prime Minister Theresa May will join over 3,000 guests at a service Wednesday marking the centenary of the Battle of Amiens, which heralded the beginning of the end of World War I.
Families of soldiers who took part in the lightning Allied advance, which smashed German defences and morale, have travelled to Amiens from across the world for the ceremony in the city's magnificent medieval gothic cathedral.
Representatives of the Australian, British, Canadian, French and US governments will also commemorate the tens of thousands of troops killed in the four days of fighting, along with former German president Joachim Gauck.
The Battle of Amiens sounded the start of the Hundred Days Offensive on the Western Front, which led to the Armistice in November 1918.
It marked a shift away from trench to armoured warfare, with the Allies deploying hundreds of tanks to push deep into German lines on what German General Erich Ludendorff called a "black day" for the German army".
May's visit is her second to France in under a week, coming days after she held talks with President Emmanuel Macron at his Mediterranean holiday retreat over her Brexit plan.
She will read from the memoirs of British wartime leader Lloyd George.
Prince William will also address the proceedings and the two will also meet with soldiers' families, including descendants of the crack Canadian and Australian troops who led the Allies into battle.
Macron, a native of Amiens, is not expected at the service, which French Armed Forces Minister Florence Parly will attend.
Denis Holden, a 65-year-old retired policeman, travelled from Melbourne in Australia to honour his grandfather, Private Michael Willis of the 14th Australian Infantry Battalion, who was injured in shelling on the first day of battle.
"He never told us anything about the war but he showed me the wounds down his back," Holden told AFP.
Willis penned a poem on the ship that brought him home about the fighting in which he reflected on the Australians "enjoying a life of freedom/Away from the stench of blood".
He was also scarred psychologically.
"In the years after the war, whenever his Model T Ford backfired, he would yell out 'Get under the bed, we'll all be killed!'. I guess that today you'd call it post-traumatic stress syndrome," said Holden, who wore two of his grandfather's service medals pinned to his blazer. 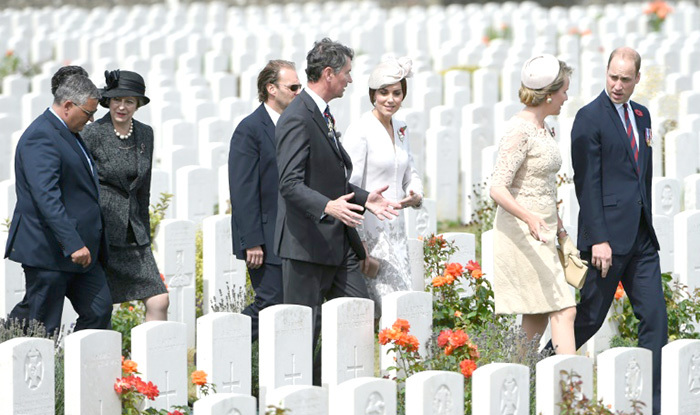 PIC: Theresa May and Prince William at The Tyne Cot Commonwealth War Graves Cemetery in Zonnebeke, Belgium last year, where they attended the commemorations for the 100th anniversary of the Battle of Passchendaele. (AFP)

By the summer of 1918 American troops were pouring into France and the Allies had drastically boosted their firepower, emboldening them to strike back at flagging German forces who had shot their bolt in a massive offensive meant to finish the war earlier in the year.
Anxious to capitalise on a victory at the Second Battle of the Marne in July 1918, Supreme Allied Commander General Ferdinand Foch devised plans for an attack around the city of Amiens, a key rail and logistics hub.
When guns began pounding German positions before dawn on August 8, the Germans were caught off guard.
Marooned in dense fog, many dazed soldiers surrendered to the Allies, who punched a gaping, 12-kilometre hole into German lines, backed by some 600 tanks and 2,000 warplanes.
The stunned German army, which had 27,000 soldiers killed, injured or captured on the first day, never recovered. By early September it was in retreat and two months later the conflict was over.
But within two decades the battle drums were echoing again and many of the officers who made a name for themselves in the so-called "war to end all wars" were back in action.
Attending Wednesday's ceremony was Helen Patton, granddaughter of World War II hero General George Patton.
World War 1 was a "training ground" for Patton, who was badly injured by machine gunfire while leading a tank brigade in battle near Verdun in September 1918.
"He learned to pray, to cuss and to handle troops", his granddaughter said.
Despite Amiens marking a turning point in the war the battle never gained the same place in the popular imagination as longer, bloodier World War 1 clashes such as the Somme or Verdun.
In the US, which entered the war only in 1917 and whose most senior representative at the Amiens ceremony Wednesday was a Paris-based diplomat, the 1914-1918 centenary has received scant public attention.
"War is often glamourised but not World War 1" Helen Patton lamented. "It's as if we almost wanted to forget it."