Coach John Duncan named a 22 man squad that will meet Tunisia this Saturday. 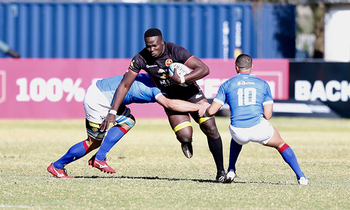 When the Rugby Cranes take on Tunisia on Saturday, they will be without Ivan Magomu one of the national teams regular player.

He was suspended from the team, having disobeyed the coaching staff and participated in the Coronations 7s last weekend.

Coach John Duncan named a 22 man squad that has most of the usual suspects to take on Tunisia, who were last month humiliated 118-00 in Windhoek by Namibia.

The Rugby Cranes, who are bottom of the table with no point, also lost their opening match to Namibia 55-6 before falling 38-22 to arch-rivals Kenya in Nairobi.

Nonetheless, they will be seeking their first win when they take on the Tunisians at Legends Rugby Grounds this Saturday.

Namibia currently lead the table with three wins and 15 points, neighbours Kenya who are also unbeaten are second on 12 points from three matches played.

Tunisia, the Rugby Cranes opponents this weekend have one win and a loss and are third with four points.

Zimbabwe and Morocco have three points each whereas, the Rugby Cranes are yet to get a point from the competition.

The winner of the Africa Gold Cup will qualify for the 2019 Rugby World Cup in Japan.