The councillors have unanimously resolved to boycott council meetings if Mwesige, who had served Kijura in 2010, reports back to office.

Residents and councillors in Kijura town council, Kabarole district, have petitioned the chief admnistrative officer rejecting the appointment of Michael Mwesige as their town clerk.

Councillors and residents led by the LCIII chairman for Kijura Manyindo Nayera on Wednesday wrote to the CAO protesting the appointment and transfer of Mwesige to Kijura on grounds that he had mismanaged funds.

"When he was still the acting town clerk in 2010, a lot of audit queries were raised against him and he failed to respond to them. We cannot work with him anymore," the letter reads in part.

The councillors have unanimously resolved to boycott council meetings if Mwesige, who had served Kijura in 2010, reports back to office.

The councillors have also vowed to petition the Resident District Commissioner for Kabarole and Inspector General of Government to investigate Mwesige.

The councillors, led by the speaker Lawrence Bakesiga, and LCIII chairman Manyindo Nayera, said they are not willing to associate with Mwesige, accusing him of dishonesty.

"Before his transfer, he had done a lot of mess in the town council and now we are surprised that the CAO is bringing him back to the Kijura," Manyindo said. 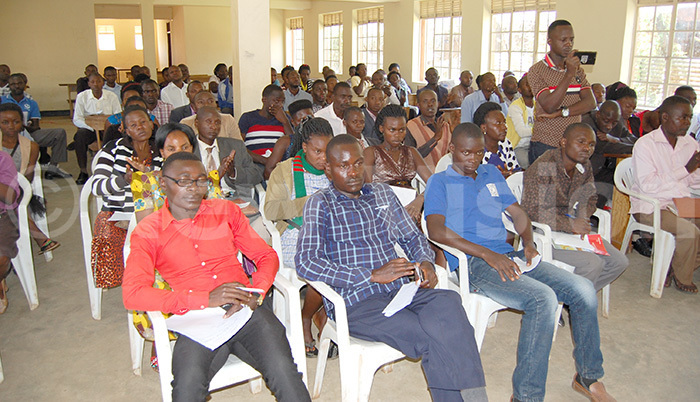 Kijura residents in a meeting with councilLors where they resolved to reject the town clerk. (Credit: Wilson Asiimwe)

Rossette Kabagambe, the female councillor for Kijura town council, said they had already written to the CAO and other relevant officials about the intended move by the district to reinstate Mwesige back to Kijura.

"We are not comfortable working with him and the CAO should respect our decision made in the council sitting of  11th July of not allowing Mwesige back to Kijura," Kabagambe said.

Scovia Musimenta,  the town youth female councilor, said it was the responsibility of the council to ensure that people get good services.

"It is our responsibility as councillors to ensure that our people get improved local government services and we shall not accept anybody who cannot contribute towards the development of our area," Musimenta said.

Mwesige has, however, denied any wrongdoing. He says he has all the vouchers to show how the money was spent when he was still in Kijura.