The rival groups have already agreed on a permanent ceasefire and withdrawing of their forces from civilian areas. 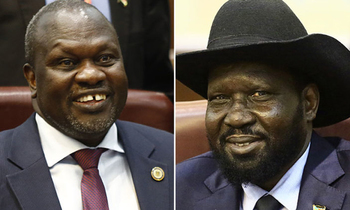 Khartoum, as part of regional efforts to end the conflict in the world's youngest country, has hosted a round of peace talks since June between South Sudan's warring leaders President Salva Kiir and rebel chief Machar.

The rival groups have already agreed on a permanent ceasefire and withdrawing of their forces from civilian areas.

On July 7 they agreed on a power-sharing deal but its signing was delayed due to differences over the contents of the accord.

The "preliminary" deal sealed Wednesday should be followed by a final one on August 5, Sudan's Foreign Minister Al-Dierdiry Ahmed said at the signing ceremony in Khartoum witnessed by journalists.

"The power-sharing document has been signed and it addresses all pending issues during the transitional term," said Ahmed as he announced the details of the pact.

"Salva Kiir will continue as president of South Sudan and Riek Machar will be the first vice president," he said.

"There will be four other vice presidents shared between other political groups."

Once a final peace deal is signed it will give the foes three months to form a transitional government under the new format, which will then hold power for a further 36 months.

Ahmed said one issue that still needed to be resolved was how to share power at the level of regions and counties, adding that some opposition groups had refused to sign Wednesday's document but discussions with them were continuing.

The deal signed on Wednesday stipulates that there will be 35 ministers in the transitional government -- 20 from Kiir's group and nine from Machar's, while the rest will represent other groups.

The parliament will be comprised of 550 lawmakers, including 332 from Kiir's group and 128 from Machar's faction.

Ahmed said an independent commission will also be formed to decide on the number of provinces in the country.

Kiir's group welcomed the preliminary deal, saying it was a "great achievement".

"We have brought peace to the people of South Sudan," South Sudan Information Minister Michael Makuei told reporters after signing of the accord.

"We will continue to work hard to ensure that the agreement is implemented in letter and spirit."

Some opposition groups refused to sign the document on Wednesday.

"There is inconsistency in the responsibility sharing formulae which is objectionable and cannot be entertained," the groups said in a joint statement.

A similar deal was signed in 2015 but fell apart a year later in a deadly battle that saw Machar flee into exile.

The war in South Sudan erupted in December 2013 after Kiir accused his former deputy Machar of plotting a coup.

The conflict has already killed tens of thousands of people and forced millions from their homes.

The latest peace initiative has been pushed by regional East African leaders, but Washington has raised doubts over it after South Sudanese lawmakers extended the present government's term in office earlier this month.

The White House has questioned the ability of Kiir and Machar to bring peace in South Sudan.

"We remain sceptical that they can oversee a peaceful and timely transition to democracy and good governance," it said in a statement.

"A narrow agreement between elites will not solve the problems plaguing South Sudan. In fact, such an agreement may sow the seeds of another cycle of conflict."

South Sudan's war dashed the optimism that accompanied independence from Sudan in 2011.

The new country quickly descended into civil war, including fighting within the national army, undermined by differences fuelled by the deep enmity between Kiir and Machar.

The war has left the oil-rich country's economy in ruins and agriculture heavily disrupted.

Seven million South Sudanese, more than half of the population, will need food aid in 2018, the UN says.