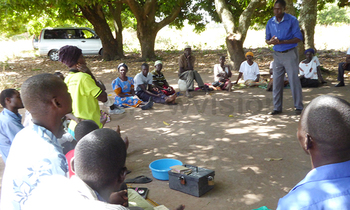 PHOTO: A member of Abarete keere Business Savings Group speaks during meeting, their savings box remained locked in their midst

Extreme poverty proportions increased from 19.7% in 2012/13 to 27% in 2016/17. Of the country's population of 39 million, the numbers of people living in poverty increased from 6.7 million to 10.1 million. This was despite several government poverty alleviation initiatives.

It is against this background that the gentle wind of transformation has been blowing in some poor, remote villages in Uganda unnoticed for the past 30 years, lifting the poorest from the pangs of extreme poverty, cannot be ignored.

Omodoi village in Apeduru sub-county, Amuria district is one such place.

Ash Wednesday prayers in this small village 60 kilometres from Soroti town was the only reason we did not catch a glimpse of Abarata Keere Business Saving Group's treasure kept in a small three-lock metal box.

Placed in front of one of the members who stood in for the treasurer at the group's meeting that afternoon, it remained locked. The treasurer had not attended the meeting because he had gone to church.

So the small metallic box with its three closed padlocks was all there was to physically see what was in the village group's savings stash even though a book with the weekly record of members' savings and loans was available for scrutiny. Abarata Keere Business Saving Group(BSG) rules stipulate that the box can only be opened when all the three individuals that keep a key each to the box's three padlocks, are all available to open it in the presence of all the group members. This is one way the group ensures that their savings are safe.

The group, one of those formed through a Graduation model by Village Enterprise, a non-profit organisation that has been working in rural Uganda for 30 years, now has sh7,926,000 savings in cash and slightly over ten million shillings out in loans after saving for ten months and three weeks.

The 30 BSG members will in a few weeks graduate from the program and each member will get back all that they have saved during the year as well as their share of the interest accrued on loans.

Ben Abule, the group's chairperson expects a little over a million shillings from his savings. He borrowed sh2m over the course of the year to plant four acres of cassava and to start an agricultural produce business.

"I plan to put up a permanent house with my proceeds from cassava sales and my savings," he said.

Christine Akiror expects over sh700,000 in savings without counting the interest. She plans to buy a cow and a bicycle to help her in her retail fish business.

Betty Apio is planning to take her child to a boarding school with her sh700,000 in savings while Thomas Opio, who had dropped out of vocational school due to lack of tuition fees, intends to go back and complete his carpentry course with the sh500,000 he has saved.

The excitement among this little group of 30 individuals selected from what were the village's poorest households a year ago is palpable.

Despite coming from one of the country's poorest regions, they have achieved what they never dreamed of as possible year ago in only ten months, thanks to a Graduation program implemented by Village Enterprise. Poverty prevalence in Teso region, according to the latest National Household survey is at 40.5%, against the country's average of 27%. But these individuals, who were among the poorest of Omodoi village barely a year ago have moved from that category.

Graduation programmes are initiatives designed to get the ultra-poor out of extreme poverty into a more stable state. The programs provide beneficiaries with holistic services including consumption support in the form of food or cash transfers, productive assets like livestock or money to invest in a business, livelihood training on how to use the asset to provide a sustainable income, access to savings and mentorship or coaching over a period of two to three years.

The Village Enterprises' graduation program is a one-year five-step process that involves targeting - which is identification and selection of the ultra-poor households in remote and poor parts of the country; training, mentorship, savings groups and provision of a modest cash transfer, in this case $100 at the start and an additional $50 after six months for those that have achieved stability.

Participants are selected from households identified as the poorest in a community through a participatory wealth ranking process where the communities and their leaders define what it means to be very poor, poor or rich and then identify the households most in need according to the communities' criteria. Village Enterprise verifies the identified households with the Progress out of Poverty Index and selects the 30 most needy households in the community to benefit from the program.

They then divide themselves into business groups of three. Each group identifies a business project. Village Enterprise does not prescribe projects for the participants, rather just support.

At the end of the training, the qualifying business owners are given a $100 grant each to fund their project to which they also add their own contribution. The groups get an additional $50 after observed consistent enterprise management.

For a year, the beneficiaries will be monitored by a business mentor helping them to navigate any challenges. The members continue to meet weekly in their Business Savings Group. Each group decides on its governance policy and minimum weekly savings per member. Members can borrow from the BSG for any purpose and many go ahead to start secondary businesses. At the end of the year, the members share out their savings and profits accrued from the loans.

"Before getting the cash grant, participants have to have a pit latrine and plant some fruit trees. We saw some improvement in health after this and compounds kept clean," Calvi says.

To document evidence of the impact of the programme, Village Enterprise invited Innovations for Poverty Action (IPA) a US non-profit research and policy organisation to study the program.

IPA carried out a Randomised Control Trial (RCT) and studied various arms of the program between 2014 and 2017.

The study involved 6,378 very poor households in 138 villages in rural Uganda. Eligible households were randomly assigned to one of six groups, each group a variation of the program as follows: In one group, the full Village Enterprise graduation program with all the five steps was implemented, in another, the training and mentorship part of the program minus the savings group; in the third unconditional cash transfers, the forth had unconditional cash transfers combined with a behavioural/mindset intervention, the fifth a variation of the full program called Business in a Box and lastly a control group with no intervention for comparison purposes.

Researchers evaluated effects of the components of the program on households' consumption, occupational choice, assets, access to financial services, and savings.

Their findings were released in Kampala last month. Results show that the Village Enterprise graduation program led to higher consumption, asset ownership and incomes among the ultra-poor.

Overall, the program led to an annual per capita increase in consumption of US$23.82 (sh85,752). In comparison, Uganda Bureau of Statistics 2017 Statistical Abstract shows that the mean consumption expenditure per capita in Uganda was sh50,900 in 2012/13 and there has been no notable growth observed up to 2016/17 especially for rural areas.

While expounding the outcomes of the study at a dissemination meeting in Kampala recently, Dr Sulaiman Munghi, one of the lead investigators said the Village Enterprise Graduation program costs were lower than the usual cost of similar graduation models.

"The program is limited to one year, as opposed to two or more years in previously studied graduation programs" the press release stated.

A Development Impact Bond (DIB) is a results-based financial mechanism where investors provide upfront funding for a development venture which is implemented by a service provider. The investors are paid by an outcome payer (donor or government) and earn a return if there is evidence that pre-agreed outcomes were achieved.

Results-based financing or Development Impact Bonds are an innovative way of ensuring that money spent on fighting global poverty has real impact. With the DIB, service providers who are often NGOs are only rewarded if and when they deliver agreed, measurable results.

For the first DIB for poverty alleviation in Africa, Village Enterprise is partnering with Instiglio, a DIB advisory group that will work as the outside experts to manage the project and evaluate its processes.

Delta Fund are the pre-financiers or investors who will be providing the project's working capital.

For this DIB, outcome measurements include increases in consumption (as a proxy for income) and net assets.

Impact will be assessed through another Randomised Control Trial conducted by IDinsight. This time round the RCT will test whether larger grant sizes see if a higher cash transfer could lead to higher impacts while maintaining program cost effectiveness.

"This payment-for-results model provides a 100 per cent guarantee that donor money will be linked to meaningful improvements in poverty alleviation outcomes, and requires funders to pay back Village Enterprise and its investors the original investment plus a return, but only if outcomes are met," a press release stated.

At $5.26million the Village Enterprise DIB has so far the biggest budget for graduation programs for the poor.

"The world's largest development agencies are looking at Village Enterprise's DIB as a test case of whether the model can be added to their anti-poverty toolkits," Calvi said.

"If it succeeds, thousands will be lifted out of poverty, it will also provide an easier blue print and structure for future DIBs. Should it fail, investors will lose their returns," she explained.

She noted that Impact Bonds also allow NGOs to attract funds they may not ordinarily get from philanthropists.

"We are happy to be part of this journey because this is going to be the future of development," she said.

Back in Omondi village, Abarete Keere Business Saving Group is warming up to their graduation in a few weeks' time, when they will share out their savings. At this point Village Enterprise will hand over the leadership to the community and exit the village to another needier one.

Asked whether they (Abarete Keere members) will keep saving with the group after the share out, the response is a unanimous, "Ebo noi noi," followed with the high-pitched melodius sound of the Teso ululations.