At just 29, Ozil walks away from Germany duty in the wake of the fiasco caused by his meeting, on the eve of the World Cup, with Turkey President Recep Tayyip Erdogan. 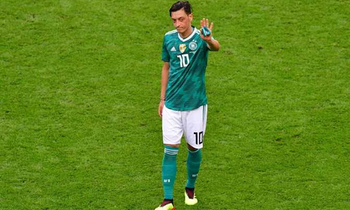 Once hailed as a prize-winning example of integration in Germany, Mesut Ozil has quit international duty amid bitter accusations of racism, levelled at German Football Association (DFB) chief Reinhard Grindel.

"In the eyes of Grindel and his supporters, I am German when we win, but I am an immigrant when we lose," Ozil wrote in a lengthy farewell statement on Sunday.

At just 29, Ozil walks away from Germany duty in the wake of the fiasco caused by his meeting, on the eve of the World Cup, with Turkey President Recep Tayyip Erdogan.

"It wasn't about politics or elections, it was about me respecting the highest office of my family's country," Ozil wrote to finally break his silence over the event in London in May.

He quits Germany after scoring 23 goals in 92 international appearances, having been a key component of the 2014 World Cup-winning side.

His ability to split defences with a single pass singled him out as one of the most technically gifted players of his generation.

Born in Gelsenkirchen to Turkish parents, Ozil's talents were discovered by local club Schalke, whom he left for Bundesliga rivals Werder Bremen in 2008.

His international breakthrough was at the 2010 World Cup as part of a bold, young German team which played eye-catching football in heavy knock-out-stage wins over England and Argentina.

Ozil's superb cross for Thomas Mueller to score Germany's fourth goal in the 4-1 thrashing of England was the highlight of an outstanding display in Bloemfontein in the last 16.

After the finals in South Africa, Ozil moved to Real Madrid for 18 million euros ($21m).

However, the shy midfielder first found himself in the grey area between sport and politics soon after.

He was booed while playing for Germany at Berlin's Olympic Stadium in October 2010 in a European Championship qualifier against Turkey.

Berlin has a large Turkish community and many in the 74,244-strong crowd were supporting the away team.

There were loud whistles whenever Ozil got the ball -- just because he had opted to play for Germany.

Like him, three members of the Turkish team that night -- Nuri Sahin, plus brothers Hamit and Halil Altintop, were born in Germany's industrial Ruhr region.

Unlike him, however, they chose to represent Turkey.

Ozil, just 21 at the time, scored the second goal in an outstanding display in a 3-0 win and subdued his celebrations out of respect.

Nevertheless, Angela Merkel's press department put out a picture of the German Chancellor congratulating Ozil in the German changing room.

The following month, Ozil won a Bambi award, a prestigious German media prize, as a prime example of successful integration in German society, but he has often had to cope with criticism.

The subtle differences Ozil makes on the pitch often means he sometimes fails to shine in matches.

Ozil quit the Bernabeu for Arsenal in 2013 and has built a large social media following with 31 million Facebook followers, 23 million on Twitter and 17 million on Instagram.

He is known for his charity work, financing medical surgery for 23 Russian children after the World Cup.

He did the same for sick minors in both Brazil and South Africa following the 2010 and 2014 finals.

Yet on the pitch, he has frustrated both Germany and Arsenal fans in recent seasons with a series of below-par displays for club and country.

In interviews, he has always avoided questions about his heritage and only once, in 2015, did he vent his anger at being referred to as a 'German-Turk'.

"Many forget that I was born in Gelsenkirchen, grew up in Germany," he fumed.

His parting shot to Grindel "I will no longer be playing for Germany ... while I have this feeling of racism and disrespect" is a direct challenge to shake up the DFB.

However, the rise of populism in Germany has often been echoed in some of the criticism he has been forced to endure.

Ozil's statement on Sunday, over three posts on both Instagram and Twitter, was seized upon by Germany's right-wing party Alternative for Germany (AfD) which has also criticised centre-back Jerome Boateng in the past.

"With his farewell tirade #Ozil proves to be a typical example of the failed #Integration of far too many immigrants from the Turkish-Muslim culture," tweeted AfD deputy leader Alice Weidel.