This year about 6000 boys are expected to be circumcised 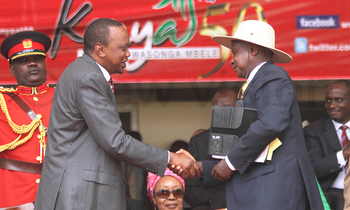 The revelation was made by the minister in charge of protocol, Mathias Nabutele, who is also the event coordinator in Inzu Yamasaba.

He also revealed that the two leaders will also launch the Bamasaba cross-border cultural center which is under construction at Mutoto sub-county in Mbale.

Nabutele said the cultural center will be used to house all documented Bamasaba history and traditions.

"We have gotten confirmation from the Kenyan government that President Kenyatta will be joining his Ugandan counterpart and witness boys being initiated into manhood," Nabutele said.

"We received confirmation from all the two heads of state that they will attendant person. We also expect about ten cultural leaders from different cultural institutions to grace the function," he added.

Nabutele also said that a team of Bamasaba from the diaspora will attend the launch, adding that the family of Bamasaba cultural leader, Bob Mushikori, based in Canada will also be attending.

He said that this year's Imbalu is being organised by Namisindwa district in conjunction with Inzu Yamasaba, adding that twelve boys will be circumcised on that day, indicating that the circumcision season has been launched.

Nabutele said that this year, they expect to circumcise about 6000 boys, adding that over 10,000 Bamasaba from Kenya will from next week start crossing into Uganda to grace the event.

"They will start arriving from next week and we getting in touch with immigration from both countries to ease process," he said.

He said that event was supposed to be launched on July 4, but it was extended to August 11 to give Kenyatta the opportunity to attend in person.

"We extended to give chance for our guest of honour to witness. Some Bamasaba had not yet harvested millet from their gardens. The millet is used to make yeast for brewing malwa (local brew) which is also important because it is dedicated to ancestors," Nabutele said.

He said that the screening and training of surgeons that will circumcise the boys has kicked off, adding every surgeon must have a certificate.

"We are also subjecting all the surgeons to tests before being given a certificate to circumcise the boys," Nabutele said.

He said areas for viewing the processions have been gazetted to avoid locals clashing with security like it has been in the past.