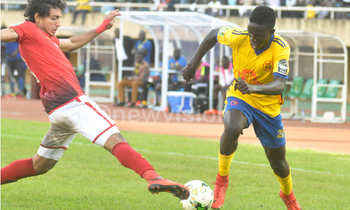 KCCA FC Midfielder Julius Poloto believes his side has what it takes to pick up a good result against Tunsia's Esperance.

Poloto was speaking ahead of KCCA's CAF Champions League game with Esperance on Tuesday at Stade Olympique de Radès in the match day three.

"It's too hot this side, but the good thing we shall play at night. This is not the first time we have been to Tunisia. The players are in a good mood and ready for the game. We are confident we shall pick up a good result in Tunisia," Poloto said.

The Lugogo side are drawn in Group A with record winners Al Ahly (Egypt), two time winners Espérance de Tunis (Tunisa) and Township Rollers of Bostwana.

Esperance top the group with four points, one above second and third placed Township Rollers and KCCA respectively. Al-Ahly come bottom with one point from two games so far played.

Last March, KCCA eliminated Ethiopia's St George 1-0 on aggregate at StarTimes stadium, Lugogo to become the first Ugandan club to progress to the group stages of the CAF Champions League ever since they were introduced in 1997.

But before that Ugandan teams such as Simba and SC Villa had reached the finals of African Cup of Champions now called CAF Champions League.