betPawa boosts the odds on all World Cup games

France is more experienced at big games, but Uruguay has had a notable tournament. 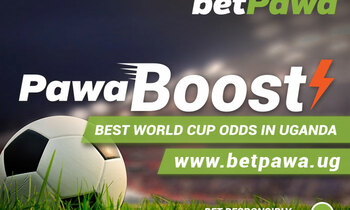 World Cup has only eight teams remaining and all of them are just three wins away to lift the trophy. betPawa has boosted all the games to give you best odds in Uganda.

pawaBoost is a new feature where prices have been boosted on selected events. Go to betPawa site and you will find "pawaBoost" section where there are always games with best pre-match odds.

The events and markets that are boosted are marked by a lightning icon.

To use the pawaBoost odds in your favour and ‘bet small, win BIG' we bring you key points from all the matches.

France and Uruguay secured their place in last eight with thrilling wins over big teams. France sent Argentina and Lionel Messi home, Uruguay had another brilliant display as they saw off Cristiano Ronaldo led Portugal. France struggled a bit in the group, Uruguay topped theirs with only wins and no conceded goals. Kylian Mbappe has been outstanding for France as Edison Cavani and Luis Suarez has let Uruguay's attack. Challenging game to predict. France is more experienced at big games, but Uruguay has had a notable tournament. Any result in this match - win either side or draw - will be a very close one.

Brazil defeated Mexico who themselves knocked Germany out of World Cup in a group stage. They cruised through their group by topping it. Belgium has a fortunate draw to face Japan, but now need to overcome Brazil. Two teams are in top three, with Brazil second and Belgium third currently in FIFA ranking. Both teams possess excellent goalscoring power, so we doubt that we see a low-affair goals game. Both sides can score, but the question is that can Belgium finally become a big team by defeating Brazil out of their way.

Sweden managed to overcome Switzerland and are having fantastic tournament having reached top 8 so far. Their next obstacle is England who managed to defeat Colombia after a penalty shootout. Three Lions are favourites in this match with a lot of players playing in Premier League but Sweden is very organised, and topping group in front of Mexico, South Korea and Germany is no easy feat. England has a great chance to advance, but so does Sweden.

Spain was expected to feature in last eight but ultimately failed to beat host Russia, who gave them a bitter flight home after 1-1 at the regular time and penalty-shootout loss. Russia is already a lot further than most predicted. Spain was one of the tournament's favourites but could not defeat one of the weakest teams on paper. Croatia has been a top team in Europe, but unable to deliver in big matches. Win over Denmark will give them a lot of confidence as they are now in top eight. Croatia has a top midfield with a very high-quality game, but Russian fighting spirit helped them saw off Spain, and they are capable of going even further with another display like this. Will hosts fantastic run end?

Join betPawa now and get your sh1000 freebet now at www.betpawa.ug

Betting can be addictive and Psychologically harmful!

betPawa is Licensed and regulated by the National Gaming Board