Youth unemployment is a time bomb that has already exploded in countries such as Tunisia and Egypy. 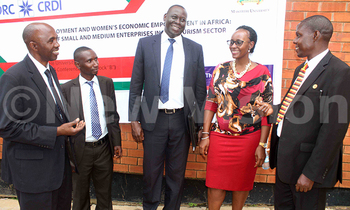 KAMPALA - There are many job opportunities in the tourism sector that should be used to ease youth unemployment and boost the employment of women according to Dr John Mutenyo, a lecturer at the school of economics, Makerere University.

Mutenyo said the government needs to do more to address the problem and dangers associated with youth unemployment and use tourism to deal with it.

This was during the launch of an inception meeting for a research project entitled; ‘Youth employment and women's economic empowerment in Africa, the role of SMEs in the tourism sectors of Mauritius, Tanzania and Uganda'.

The research team led by Mutenyo aims at identifying avenues in tourist SMEs that can generate more jobs for youths and women.

The team will investigate challenges that women and youth face in operating SMEs in the tourism sector.

They will identify the factors that policies can address in creating employment opportunities for youths and empowering women in the sector.

They will examine the Mauritian success story relating to job creation and women economic empowerment that Uganda can learn from.

The meeting took place on yesterday at Makerere University, Kampala.

Mutenyo explained that youth unemployment was a time bomb and in countries like Tunisia, Egypt the bomb exploded leading to riots over unemployment.

Mutenyo added that in African countries women face unemployment worsened by the fact that women have unequal access to resources.

He noted that women also face cultural constraints that hinder them from getting formal employment.

He observed that reports show that youth unemployment in Uganda was considered one of the highest in Africa.

"Compared to the jobs available, 400,000 youths are released annually into the job market to compete for about 9,000 jobs in Uganda", Mutenyo said.

He compared this to Tanzania, where it is estimated that every year over 800,000 youth enter the labour force and that youth unemployment stands at 13.4%.

While unemployment among the youth in Mauritius, a country known for its success story in tourism was recorded at  25.3%.

Commenting on the agenda of developing countries, Mutenyo said  economic empowerment of women has become an important avenue for achieving gender equality and uplifting the livelihoods of women.

He said the fifth Sustainable Development Goal (SDG) calls for the attainment of gender equality and empowerment for all women and girls by 2030, with tourism standing among the sectors that can fast track its attainment.

Mutenyo said the World Tourism Organisation believes that tourism can provide pathways to empowerment of women and youth, gender equality, income-generation, entrepreneurship and that the opportunity for tourism to make a difference in this area should be maximised.

"Women are mostly concentrated in the lower status and lower paid jobs in tourism, their potential to contribute fully are currently untapped.

"The majority of people employed in tourism worldwide are women, both in formal and informal jobs. Generally, the tourism sector tends to employ more youth than the old, and more women than men," Mutenyo said.

He further said studies have shown that youth tend to comprise over 50% in the accommodation, café and restaurants, and pubs and bars jobs.

Also, women comprise over 60% of the workers in the following tourism sub-sectors: housekeeping, laundry, food preparation, guest services, hotels and restaurants, food and catering and accommodation.

Newton Akiza, planner, ministry of tourism, wildlife and antiquities said about 6% of Ugandans are employed in the tourism and there were still plenty of untapped opportunities that need to be identified and created.

Akiza said when a tourist spends sh100,000 in Uganda, 20 families can get supper.

"Every visitor who comes to Uganda spends about $132 (sh475,000).Some return the money because they do not get good food, good souvenirs.

"Some people are training in tourism but offering poo services while some people learn catering but do not know how to fry an egg," Akiza said.

James Ebitu, director social services, ministry of gender labour and social development said the international definition for unemployment which considers registering with an employment bureau or answering to a job advert among others puts lower unemployment rates in Uganda which are contested by the public.

Ebitu said some causes of youth unemployment include negative attitude towards work, lack of skills and access to finance.

Mark Kirya, president Hotel General Managers Association of Uganda asked the government to speed up implementation of programs and responding to public needs that can improve the economy.

Kirya said some hotel owners have been forced to construct roads to their hotels which lead to loss of funds and increasing cost of doing business.

Nahamya said taxi drivers without knowledge of the tourism are entering the business which was abusing the industry and more regulations were needed.