Kane, who now has five goals in Russia, leapfrogged Cristiano Ronaldo and Romelu Lukaku in the race for the Golden Boot. 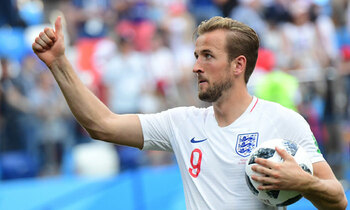 PIC: Kane completed his hat-trick in the 62nd minute and was then taken off by Gareth Southgate. (AFP)

Harry Kane struck a hat-trick as England demolished Panama 6-1 on Sunday to ease into the World Cup last 16 alongside Group G rivals Belgium.

Kane, who now has five goals in Russia, leapfrogged Cristiano Ronaldo and Romelu Lukaku in the race for the Golden Boot as the Central Americans were sent packing along with Tunisia.

Belgium and England -- who meet in Kaliningrad on Thursday to battle it out for top spot -- both have six points after two games and are level on goal difference and goals scored.

England recorded their biggest-ever victory at a World Cup despite the sapping heat in Nizhny Novogrod, playing with youthful zest and imagination against their disappointing opponents.

Two penalties from Kane and two goals from John Stones, plus an impressive strike from Jesse Lingard, gave England an unassailable 5-0 lead at half-time.

Kane completed his hat-trick in the 62nd minute and was then taken off by Gareth Southgate, who was looking to preserve the energy of his captain with tougher challenges ahead.

Felipe Baloy, 37, scored the first-ever goal for Panama at a World Cup to narrow the gap but it could not mask the vast gulf in quality between the two sides.

"I'm very proud. Not many players get to score a hat-trick in the World Cup," said Kane, who is only the third England player to score three goals in a World Cup match after Geoff Hurst and Gary Lineker.

"We have to enjoy this. It's not every day we get to go through after two games."

Southgate said he was pleased with his side's ruthlessness.

"It was a different type of win to the other day (against Tunisia)," he said. "Then we had to go right to the wire and show qualities that are going to be really important to our resilience and sticking to our principles of play."

Belgium hammered Tunisia 5-2 on Saturday, with two goals from both Lukaku and Eden Hazard.

Later Sunday, Japan and Senegal played out a 2-2 draw in Group H, keeping both on course for a place in the next round.

Japan, who beat 10-man Colombia in their first match in Russia, dug deep in Yekaterinburg, coming back twice in an entertaining match.

Sadio Mane's opening goal was cancelled out by Takashi Inui later in the first half. In the second period Moussa Wague reestablished Senegal's lead but substitute Keisuke Honda pegged them back again.

"We must acknowledge that we didn't see a great Senegalese performance tonight in comparison to the match against Poland," he saaid.

"We were not very good frankly, and Japan were the better team, I have to admit that. But despite that fact, we led twice and what's annoying for me is the two goals we conceded."

Poland and Colombia round off the second round of group matches in the late game in Kazan, both knowing they dare not lose if they want to retain any realistic hope of progressing.

Bayern Munich's James Rodriguez, the star of Colombia's march to the quarter-finals four years ago, was included in the starting line-up, with Bayern Munich forward Robert Lewandowski the main threat for the European side.

There has not been a single 0-0 draw in Russia so far.

World Cup holders Germany were breathing a sigh of relief after Toni Kroos's 95th-minute missile secured a last-gasp 2-1 win over Sweden on a dramatic Saturday in Sochi.

But they are not out of the woods yet -- to guarantee they have the chance to become the first team to successfully defend the title since Brazil in 1962, Germany must beat South Korea by a two-goal margin in Kazan.

"Something like this can be a big moment in the tournament. But if we lose against South Korea or don't make it to the next stage, the goal isn't worth anything."