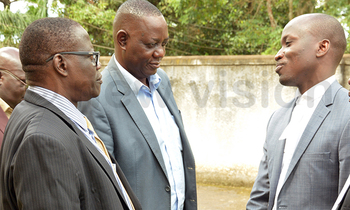 Former minister Abraham Byandala (left) with Joe Ssemugooma and lawyer William Were (right) at the Anti-Corruption Court at Kololo. Photo by Godfrey Kimono

Lawyers of the former works minister, Abraham Byandala and his co-accused have asked court to acquit them of causing financial loss of sh24.7b to the Government in the botched Katosi road contract.

The money was meant for the upgrade of 74km Mukono-Katosi-Nyenga road from gravel to paved standard.

In his final submissions on Tuesday, lawyer William Were invited the trial judge, Lawrence Gidudu, to acquit all the accused on grounds that there was no evaluation of the loss caused by the time the Inspector General of Government (IGG) stopped the road works.

"There is no way court can convict the accused without ascertaining the actual loss caused to the Government. Prosecution would only have exhausted their case if the amount of loss caused was ascertained," Were submitted.

Were, the lawyer to Joe Ssemugooma, the former Uganda National Roads Authority (UNRA) acting director for finance and administration, argued that since there was no joint evaluation by UNRA and Eutaw of the work done, there is no loss caused in the case before court.

"One of the prosecution witness Martin Olwa said that by September, 2016 works done was valued at sh5.5b and Nu Hong said that by December work done was sh12.2b. Therefore with such imaginably figures, it is hard to believe whether there was loss or not," Were submitted.

According to Were, since the value of the work done by the accused is unknown, Byandala and his co-accused should not have been put in the dock.

He asked court to acquit the accused on all counts, on grounds that prosecution evidence is riddled with inconsistencies.

Were submitted that Ssemugooma only rubberstamped what had already been done by UNRA's senior staff, including the chief accountant John Mpanga, without knowledge of the likely consequences.

He submitted that failure by prosecution to call Mpanga to give evidence left a gap in the entire case.

On July 28, 2015, Byandala and his co-accused were arraigned before the Anti-Corruption Court and charged with 24 counts including abuse office, causing financial loss, theft, influence peddling and obtaining money by false pretence.

Mubiru submitted that since the funds were available and having learnt of the legal opinion of the Solicitor General of clearing the contract to be signed, Byandala wrote a letter to UNRA executive director because he saw no reason as to why the works on the road came to a halt.

"Byandala did not direct the signing of the contract but out of concern since the issue had become a political problem as government had promised the people this road for so long and the same had been in the country's budget so many times," Mubiru submitted.

Mubiru submitted that the issue of due diligence is settled by law under Regulation 3 of the Public Procurement and Disposal of Public Assets Act, which provides that due diligence can be carried out on a provider at any time and therefore Byandala did nothing arbitrary or irregular as prosecution alleges.

Mubiru explained to court that since UNRA had no board between 2010 and February 2014, Byandala by law assumed the powers of the board as chief supervisor of UNRA and there was nothing irregular about it since is provided for under section 5 and 14 of the UNRA Act of 2006.

"Whatever Byandala did or communicated in regard of Katosi road contract was in exercise of his statutory powers and functions. Therefore Byandala could not influence any of the UNRA activities during procurement process," Mubiru submitted.