Meloon, a two-time world champion, claimed in a 2007 complaint she was raped by Jean at the 1997 World Cup in Egypt when she was 15. 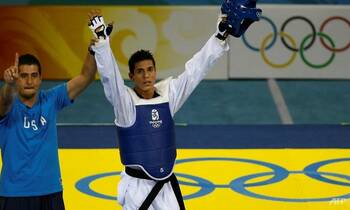 Four women athletes accuse the US Olympic Committee and USA Taekwondo of sex trafficking in a federal lawsuit,alleging they were forced to train and travel with known sexual predators.

Heidi Gilbert, Mandy Meloon, Amber Means and Gaby Joslin went to court Friday in Colorado over what they called "two decades of sexual abuse, exploitation and trafficking of Team USA's Olympic taekwondo athletes by the entities, officials, coaches and mentors who were entrusted to protect them".

The lawsuit cites former US Olympic taekwondo coach Jean Lopez and his brother Steven, a two-time Olympic champion in the sport.

The US Centre for SafeSport issued Jean a lifetime ban from all World Taekwondo events.Steven has an interim restriction while his investigation continues.

Meloon, a two-time world champion, claimed in a 2007 complaint she was raped by Jean at the 1997 World Cup in Egypt when she was 15. She was left off Jean's 2007 squad, pressing her case to USOC arbitration.

"From at least 2007 onward, the USOC and USA TKD have knowingly protected, empowered and clothed Jean Lopez with the authority, legitimacy and trustworthiness of being the official coach of Team USA's taekwondo team and his brother Steven with being the superstar of USA taekwondo," the suit said.

"In doing so, they have exposed hundreds of young female athletes to two adult sexual predators,the coach of USA Taekowndo and his own brother."

The suit claims "in their shared lust for 'medals and money,' the USOC and USA TKD have sheltered Steven Lopez from prosecution because he delivers commercial riches."

Gilbert said Jean had sexually assaulted her after events in Ecuador in 2002 and Germany in 2003.

The suit says women who wanted onto the US taekwondo team "had no choice but to submit to the Lopez brothers' sexual demands. If they refused to do so, they were benched, suspended or kicked off Team USA by the Lopez brothers, the USOC and USA TKD."

In a statement to USA Today and the New York Times,USOC spokesman Patrick Sandusky said the organization "is deeply focused on supporting, protecting and empowering the athletes we serve".

He told the Times that several actions being undertaken, including the launch of the US Center for SafeSport, will "ensure that our athletes are better protected from these heinous acts".

USA Taekwondo said in a statement to the newspapers that it has not had time to review the details of the lawsuit and so "as this is an in-process legal matter it would be inappropriate for us to comment further at this time."