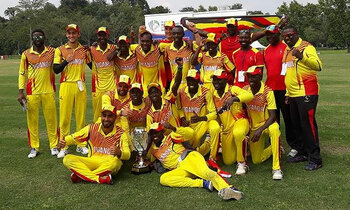 (Uganda win by seven runs to be crowned champions)

This was Uganda's fourth win in five games at the ICC World Cricket League Division Four and it ensured they finish top of the group at the end of the round-robin stage.

The two teams first met on Saturday, but the game was declared a no-result after the rain stopped play, with Uganda at 55/3 with 19.4 overs played.

The replay was a sloppy batting affair, doubtless the result of worn out wickets.

Kenneth Waiswa and Riazat Shah led all scorers for Uganda with 34 and 22 runs respectively.