Fr. Gerard to be laid to rest on Monday

The funeral service which will be led by Archbishop Cyprian Kizito Lwanga will start at 12:00pm. 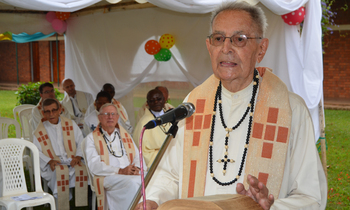 RUBAGA - The Superior of the White Fathers in Uganda, Fr Oswald Mallya has released a burial programme of Fr Gerard Raynaets, a former senior member of the congregation that passed on at Nsambya Hospital on Thursday.

Raynaets died at the age of  93 after working in Uganda for 60 years.

Fr Gerard's body will be taken to Lordel House, Nsambya this Sunday, where a funeral service will be held at 4:00pm.

The body will then be taken to St John the Baptist Catholic Church, Nabulagala, Rubaga division, where the funeral and vigil will be held.

Gerard will then be buried on Monday, May 7, at Nabulagala Catholic Church.

The funeral service which will be  led by Archbishop Cyprian Kizito Lwanga will start at 12:00pm.

Following his death, different people that have worked with the late, commended the good services that he extended to the public.

Fr Oswald Mallya described him as a faithful and prayerful priest, who served his congregation and the universal Catholic Church with utmost commitment and love.

"He loved God with all his heart. He listened to God when he called him to become a missionary. To him, material things did not matter. This explains why he has been using a very simple car. He focused on God alone," said Mallya.

"His voluntary decision to leave his beautiful country behind and work in Uganda for all these years shows how much he loved the people of Uganda and Africa at large. Very many people benefitted spiritually from his insightful retreats.

"We thank God for all the good things he has enabled him do for the people. Let us always remember him in our prayers.

"Let us also try to put in practise the things he has always taught us," said Lwanga.