Pence described them as "victims" of activists, smugglers and the media and called on Congress to close "dangerous loopholes" allowing people to claim asylum in the US rather than the first safe country they enter. 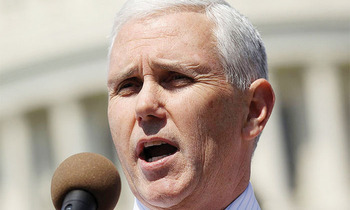 Pence's remarks came as he toured a construction site for a barrier in the Californian border town of Calexico. (AFP)

Pence's remarks came as he toured a construction site for a barrier in the Californian border town of Calexico, 120 miles (200 kilometers) east of the San Diego-Tijuana crossing where the group of at least 150 people has amassed.

"I stand before you today when most of the attention of the nation has been focused on the so-called caravan," Pence said.
"As the president said on Saturday night, this situation is a direct result of our weak immigration laws and our porous border."
The visit came after the Central American migrants arrived Sunday in the border town of Tijuana, part of a caravan of more than 1,000 people who set out from southern Mexico in late March.
Pence described them as "victims" of activists, smugglers and the media and called on Congress to close "dangerous loopholes" allowing people to claim asylum in the US rather than the first safe country they enter.
Eight members of the caravan crossed into the US on Monday, according to the Washington Post, where immigration authorities had launched the process determining whether their asylum claims would grant them entry.
The Department of Justice meanwhile announced late Monday it had filed criminal charges against 11 "suspected members of the so-called 'caravan,'" accusing them of illegally entering the United States.
The department said one of those charged had allegedly already been deported once.
"When respect for the rule of law diminishes, so too does our ability to protect our great nation, its borders, and its citizens," said Attorney General Jeff Sessions in a statement.
Media coverage of the US-bound caravan has triggered a flurry of furious tweets from Trump, who ordered thousands of National Guard troops to the border and called on Mexico to stop the migrants.
"We don't have borders, we don't have a country. And I've been watching for weeks as the caravan came up," Trump told reporters at the White House on Monday.
"And, you know, the Mexican laws are very tough on immigration, extremely tough."
He reiterated his call for an end to the "catch and release" protocol under which people detained by US authorities as unlawful immigrants can be released while they wait for a hearing.
"You've got to have a wall. And we need border security, and we will have border security. As you know, we're sending many, many National Guardsmen down to the border," Trump said.
"Most of them are already there. And that's having a big impact. But we need a change in the law. Catch and release is ridiculous."
Pence's visit comes four weeks after Trump toured wall prototypes in Otay Mesa, just north of the border.
Plans were launched in 2009 for the Calexico structure -- which replaces around two miles of decades-old barriers according to the Los Angeles Times -- although Trump sowed confusion last month when he tweeted photos and wrote: "Great briefing this afternoon on the start of our Southern Border WALL!"
Officials have emphasized that the Calexico barrier shouldn't be confused with the yet-to-be-built wall that Trump made a central plank of his 2016 presidential campaign.