Uganda's Sula Mpanga will personally have himself to blame when he failed to convert a penalty during the first half of the game. 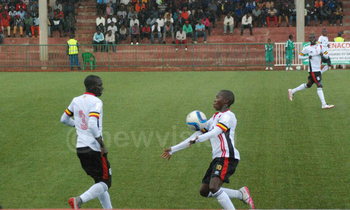 The Uganda Cubs were left nursing wounded egos following their embarrassing exit from the CECAFA U17 tournament in Burundi.

Garvin Kizito and Co chocked up to a 1-0 defeat at the hands of Somalia at the Gitega Stadium in a semifinal Wednesday to bring an end to their pursuit for a record second title.

Uganda's Sula Mpanga will personally have himself to blame when he failed to convert a penalty during the first half of the game.

Somalia have used a defensive approach to eliminate the big dogs from the event contested amongst East and Central Africa nations.

They had earlier on beaten Kenya to top Group A in the preliminary round of the tournament that started in 2007 with Burundi winning the inaugural event. Uganda won the second edition in 2009 when it was hosted in Sudan.

This year's edition is the third as Somalia and Tanzania face off in the final on Sunday. Tanzania cruised past Kenya 2-1 in the other semifinal.

Cubs' up-and-coming star Moses Bakabulindi will now hope to guide his side to a third finish in a losers match on Sunday before the final.