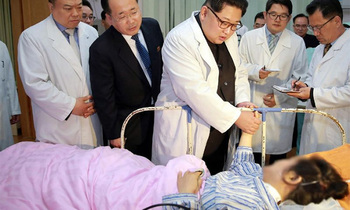 North Korean leader Kim Jong Un has expressed his "bitter sorrow" after dozens of Chinese tourists were killed when a bus they were travelling in plunged off a bridge.

In a rare admission of negative news from North Korea's tightly controlled propaganda network, the KCNA news agency on Tuesday said Kim met personally with the Chinese ambassador in Pyongyang and later visited survivors in hospital.

The Rodong Sinmun newspaper, the mouthpiece of the ruling party, carried a front-page on Kim's actions, including pictures of him in a doctor's white coat, holding the two survivors' hands as they lay in their hospital beds.

Although such a move might be unsurprising in other countries, it is an unusual portrayal of Kim, who is usually shown presiding over formal meetings or visiting work or army units.

Kim "said that the unexpected accident brought bitter sorrow to his heart and that he couldn't control his grief at the thought of the bereaved families who lost their blood relatives," KCNA reported.

The North Korean leader said his people "take the tragic accident as their own misfortune", it added.

The fulsomeness of Kim's comments reflects the importance of China -- and its tourists -- to his country and economy.

Their relationship was forged in the blood of the Korean War, and while it has soured more recently, with China increasingly exasperated by the North's nuclear antics and enforcing UN Security Council sanctions against it, there has been an improvement in recent weeks.

Last month, Kim embarked on his first overseas trip since inheriting power in 2011 to finally pay his respects to Chinese President Xi Jinping, and was warmly welcomed in Beijing.

China is by far the biggest source of tourists for the North, with direct flights and a long land border connecting the neighbour, and tens of thousands are believed to visit every year, many crossing via train through the Chinese border city of Dandong.

For some, North Korea provides a window into what Communist China may have looked like decades ago.

In contrast Western visitors to the North once averaged around 5,000 a year, but numbers have been hit recently by a US travel ban -- Americans accounted for around 20 percent of the market -- and official warnings from other countries.

Xinhua news agency reported that the bus had fallen from a bridge in North Hwanghae province.

China's state broadcaster showed images of a large overturned vehicle, with light rain falling on rescue vehicles at night and doctors attending to a patient.

KCNA said the crash was "an unexpected traffic accident that claimed heavy casualties among Chinese tourists". It gave no breakdown on the numbers killed or injured.

The Chinese foreign ministry said Tuesday a group of officials and five medical experts had arrived in Pyongyang to assist the North in treating the injured and dealing with the aftermath.

They also visited a temporary morgue for the dead to check their identities and express condolences, it said.

North Hwanghae province lies south of Pyongyang and stretches to the border with South Korea. It includes the city of Kaesong, an ancient Korean capital with historical sites and, until recently, a manufacturing complex operated with the South.

The tour group was travelling by bus from Kaesong to Pyongyang when the accident happened, according to the independent Seoul-based website NK News, which cited an unnamed source.

North Korean roads are largely poor and potholed, and in many areas they are dirt rather than tarmac. Vehicles are sometimes forced to ford rivers or take detours when bridges are unpassable.

But the route from Pyongyang to Kaesong is one of the best in the country.

It runs north-south from the Chinese border to the Demilitarized Zone on the border with South Korea but has little traffic, like all North Korean highways.

Tank traps have been installed along the road in many locations -- sets of high concrete columns on either side of the road that can easily be blown up to create an obstruction for invading armoured vehicles.