The Commissioner of Police (CP), Baryamwisaki, replaced Amos Ngabirano, who recently resigned his position in the Uganda Police Force (UPF). 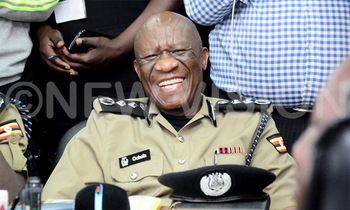 In the ongoing shake-ups under the new administration, the Police chief, Martin Okoth Ochola, has appointed Felix Baryamwisaki, as the acting director Information and Communications Technology (ICT).

The Commissioner of Police (CP), Baryamwisaki, replaced Amos Ngabirano, who recently resigned his position in the Uganda Police Force (UPF).

Until recently, Ngabirano, an ICT expert, was the only civilian who headed a directorate in the UPF. He has been getting three years renewable contracts with the current one ending in March, this year.

In February, the Internal Affairs minister, Gen. Jeje Odongo announced, Ngabirano's resignation. He said the resignation was not peculiar.

Explaining the resignation then, the minister (Odongo) said: "Ngabirano's contract runs out in March (last month) and was not seeking a renewal."   However, it emerged recently that the Police's ICT directorate was under probe over a series cases related to procurement.

The directorate (ICT) has been in-charge of key installations especially for Closed Circuit Television (CCTV) cameras, where police provides security services to key accessories and establishment that are of strategic importance to the country such as the Parliament, Airport, Bridges, Banks, government offices, and hospitals among others.

In a statement sent to media houses on Tuesday, the Police spokesperson, Emilian Kayima, announced that the police chief (Ochola) had made changes in the ICT directorate.

Others were: Ezra Mujabwami, who was acting CP ICT maintenance, Ahmed Wakwale, was transferred from Kampala Metropolitan Police (KMP) to ICT, Police headquarters as commissioner in charge communications.

Assistant Superintendent of Police, Abdallah Nyabongo, was appointed the in-charge ICT KMP. According to Kayima, the transfers and appointments take immediate effect.

In the same reshuffle, Geoffrey Chombe, the former Counter Terrorism (CT) boss, was appointed the head of the Police's Crime Intelligence, previously headed Lt Col Ndahura Atwooki.  A fort-night ago, the Army recalled Atwooki from the UPF.

CT is headed Abbas Byakagaba and deputised by Wilson Omoding. In the new Police administration, Chombe will be deputised by Charles Asaba at the directorate of Crime Intelligence.

Until yesterday, Asaba was still in the US on a counter Terrorism training course for two months.

Kafeero was replaced with Assistant Commissioner of Police, Lawrence Nuwabiine.

The changes in the UPF are aimed at rectifying their following the recent negative picture painted about the force across the country. Several Police officers have been implicated in a series of case ranging from theft to torture.