The energetic young French leader wants big changes in the face of growing scepticism about the European project, but there has been a marked lack of enthusiasm from Berlin to Budapest. 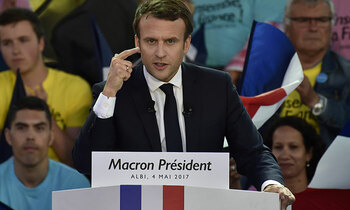 PIC: Macron wants a number of changes in the European Union

FRANCE - French President Emmanuel Macron will on Tuesday address the European Parliament for the first time in a bid to shore up support for his ambitious plans for post-Brexit reforms of the EU.

The energetic young French leader wants big changes in the face of growing scepticism about the European project, but there has been a marked lack of enthusiasm from Berlin to Budapest.

Macron's speech to MEPs in the eastern French city of Strasbourg is part of a charm offensive ahead of European Parliament elections in May 2019, the first after Britain's departure.

"He will say that it is urgent to take action at a difficult time both inside the European Union, and outside," said the Elysee, the French presidency, ahead of Macron's address.

Internal problems include election results in Italy and Hungary which both saw eurosceptics surge in popularity, compounding fears that the 2016 Brexit vote was part of a pattern.

Externally the EU is dealing with the war in Syria -- France and Britain joined the US in air strikes targeting the regime's alleged chemical weapons at the weekend -- a hostile Russia, and the unpredictable figure of Donald Trump in the United States.

Macron said in a television interview on Sunday that Europe was experiencing a "rise in illiberalism... the populism of people who call the rule of law into question."

Later this week Macron will travel to Berlin for crucial talks with German Chancellor Angela Merkel to try to win her support for his plans for the future of the eurozone.

Merkel's conservative CDU party pushed back on Monday against plans for deeper eurozone integration, including a separate eurozone budget and the expansion of the EU's bailout fund.

Any reforms have to be "in the European and in the German interest," CDU secretary-general Annegret Kramp-Karrenbauer told reporters.

EU leaders are set to adopt preliminary Macron-backed plans for eurozone reforms and for an overhaul of its troubled asylum system in June, but there is still a large amount of work to do.

Merkel is due to address the European Parliament in November, officials said on Monday.

In contrast, Merkel made a joint speech with then-French president Francois Hollande in Strasbourg in 2015 in which they urged unity in the face of the migrant crisis.

European lawmakers welcomed Macron's decision to address the parliament but urged him to turn words into action as soon as possible.

Macron had "lots of projects for Europe" but "not everything he has proposed has been well received", said Manfred Weber, a Merkel ally who heads the centre-right European People's Party, the biggest group in the European Parliament.

He added that it was a "handicap" that Macron -- who rose to power on the back of his new En Marche party -- did not belong to any of the main political groups in the European Parliament.