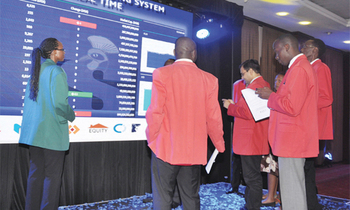 The Uganda Securities Exchange (USE) has gone through several changes since it opened for trading in January 1998. The USE's chief executive officer Paul Bwiso had a chat with the New Vision's Samuel Sanya about the organisation's past, present and future. Below are excerpts:

Qn: What does making 20 years mean to the Uganda Securities Exchange?

A lot has changed for an exchange that was once based on Nkrumah Road to one that is now located at the UAP business park in Nakawa, probably one of the biggest buildings in the country. The company has grown from about two staff to about 25 currently.

We have an automated trading engine with a system that enables brokers to trade from anywhere in the world. We have demutualised the Exchange; a lot of people thought that would not happen. A lot has happened, on the transaction side. We have traded 16 bonds grossing about sh388b.

When it comes to equity listings, we have traded about sh1.2 trillion. The numbers are good, but not yet good enough. I think we should have had more support and more advocacy in the market because the exchange is a barometer for the economy.

So if it is not utilised as a vehicle for long term financing by the private sector and government, then that is a weakness and I think that is where we have to put a lot of effort to get the politicians and all relevant stakeholders on board to understand how the USE functions. CLICK HERE  FOR MORE ON THIS STORY

USE evolution over the years

The Uganda Securities Exchange (USE) started as a labour of love before it received the Government support. Over the years it has significantly grown and is set for expansion. Samuel Sanya, traces this history

Between 1980 and 1985, the Structural Adjustment Programmes and micro-finance were at the cornerstone of public policy — with household savings presumed non-existent, and if there were traces of it, they were recognised as off balance sheet.

Poverty eradication was at the root of public policy and public equity and the ‘bond market' for that matter was fiction. In order to put the subject of a second East African stock exchange on the public policy table in Kampala, Dr G. A. Onegi-Obel became a publisher, establishing The Financial Times of Uganda — Uganda's first publication dedicated to reporting on the economy — with a bias to open market transactions.

Onegi-Obel, with the help of the World Bank, won a fellowship (Albert Parvin Fellow) to Princeton University to research the capital markets industry — with a view of establishing the Uganda Stock Exchange. Armed with further experience from the New York Institute of Finance (NYIF), Onegi-Obel sold the newspaper and began the process of mobilising key stakeholders to push for the establishment of a Uganda Stock Exchange trading platform. CLICK HERE FOR MORE ON THIS STORY

National Insurance Corporation (NIC), a leading provider of insurance and risk management, has currently listed sh1.4b shares on the Uganda Securities Exchange. Trading at sh5 per share, the market capitalisation is about sh21b. About NIC NIC is the oldest insurance group on the Ugandan insurance landscape.

The corporation was established as a Government entity by the National Insurance Corporation Act of 1964. In 2005, NIC was privatised but the Government retained 40% shares which were downloaded using the IPO process in 2010. This is when NIC became the only Ugandan insurance body listed on the Uganda Securities Exchange.

But, with the new Insurance Act in 2014, which required composite insurance companies to separate their insurance businesses under two different entities for general and long term businesses, the company transformed into a dynamic insurance group with life and non-life wholly subsidiaries delivering world class insurance services to the increasing number of clients. CLICK HERE FOR MORE ON THIS STORY