Juma Miiro defeats Shaffi Hassan of Kenya in the men's 46-49kg to progress to the semifinal stage. 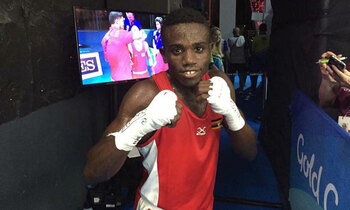 Miiro emerged victor over the Kenyan with a judges' decision of 3:2 inside the Oxenford Studios on day six of the ongoing Commonwealth Games in Australia's Gold Coast.

The 22-year-old Ugandan fighter will face off in a duel with India's Amit, who is also 22, in the second semifinal on Friday.

The fight will start at 5:17am Ugandan time. Don't forget to set your alarm clock if you want to watch it.

To get to the semifinals, Amit had to beat Scotland's Aqeel Ahmed in Tuesday morning's quarterfinal.

Miiro will fight in fight in red and Amit in blue.

How Uganda has done on Tuesday

It was a busy start for Team Uganda on Tuesday.

While most of Uganda was tucked in bed, several miles away in Australia (at 2:00am Ugandan time), Charles Kagimu took part in the men's road bicycle race (individual time trial).

The winner was home interest Cameron Meyer of Australia, who cross the finish line with 48:13.04 minutes.

In the women's version, Halima Nambozo also could not do much about Malaysia's Li Sian Alice Chang, who beat her 4-0 in group 9.

It was a similar script in squash for the Ugandan camp.

The duo of Michael Kawooya and Ian Rukunya was beaten by England's Selby Daryl and Waller Adrian in Pool G's men's doubles.

Uganda also had representation in the badminton round of 64 - a case of mixed results here.

The duo of Edwin Ekiring and Shamim Bangi could not fashion a way past Sachin Dias and Thilini Pramodika Hendahewa.

On the Carrara Stadium track, Ugandan sprinter Pius Adome failed to make the cut for the semifinals after finishing fourth in heat two of the men's 200m round one.