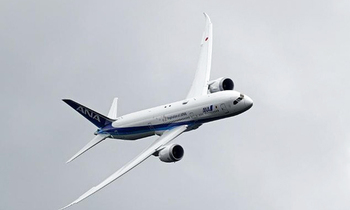 US - American Airlines has ordered 47 Boeing 787 Dreamliners in an order valued at $12b at list prices, while cancelling a major order for Airbus A350s.

The sale brings American Airlines' total number of 787s to 89 aircraft. Though the total value is $12 billion at list price, the final price paid by airlines is generally lower.

American Airlines said: "As part of the strategy to simplify its fleet, American agreed with Airbus today to terminate its order for 22 A350s, which was originally placed by US Airways," which it bought in 2013.

"This was a difficult decision between the Boeing 787 and the Airbus A350 and A330neo and we thank both manufacturers for their aggressive efforts to earn more of American's business. In the end, our goal to simplify our fleet made the 787 a more compelling choice," said American Airlines president Robert Isom.

American Airlines also said it had deferred delivery of 40 Boeing 737 MAX aircraft previously scheduled to arrive between 2020 and 2022. The carrier said the revised schedule "will better align with planned retirements of other narrowbody aircraft."

The order for US manufacturer Boeing comes in the wake of protectionist trade measures by President Donald Trump, who champions buying from US manufacturers.

"We are extremely honored that American Airlines is deepening its commitment to the 787 Dreamliner," said Boeing Commercial Airplanes president Kevin McAllister in a statement. Boeing says it has more than 1,350 orders registered for the 787.

Meanwhile, Airbus announced earlier Friday it recorded 45 net orders during the first three months of 2018, and delivered 121 aircraft. The company said its overall backlog of jetliners to be delivered stood at 7,189 as of March 31.

The move has heightened tensions with Mexico, whose President Enrique Pena Nieto said Trump's "threatening or disrespectful attitudes" were unjustified.

It has also raised questions about who will fund the mission.

The Pentagon could not say where the money would come from and Trump admitted the White House was still "looking at" costs.

If 4,000 troops were deployed, that would be about double the current US military presence in Syria and about half as many as the number of US troops in Iraq.

The National Guard has previously been deployed to help patrol the southern border, including in 2010 under former president Barack Obama, and from 2006-2008 under George W. Bush. Both deployments were limited to around a year.