"Sexual assault crimes remain tragically common in our society, and offenders too often evade accountability," said a proclamation from Trump released by the White House. 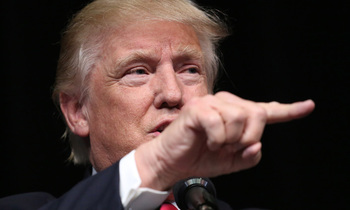 US President Donald Trump -- who has himself been repeatedly accused of sexual misconduct -- on Friday designated April 2018 "National Sexual Assault Awareness and Prevention Month" amid a national debate over the issue.

"Sexual assault crimes remain tragically common in our society, and offenders too often evade accountability," said a proclamation from Trump released by the White House. "These heinous crimes are committed indiscriminately: in intimate relationships, in public spaces, and in the workplace."

"Too often, however, the victims of assault remain silent. They may fear retribution from their offender, lack faith in the justice system, or have difficulty confronting the pain associated with the traumatic experience," it continued.

"My administration is committed to raising awareness about sexual assault and to empowering victims to identify perpetrators so that they can be held accountable."

At least 20 women have publicly accused Trump of engaging in sexual assault or harassment prior to becoming president. The White House has maintained that the women are lying.

Last month, Trump described allegations that he kissed a receptionist without her consent as "Another False Accusation" in a post on Twitter, calling instead for coverage of "the story of the women taking money to make up stories about me. One had her home mortgage paid off."

Since former film mogul Harvey Weinstein's dramatic downfall over allegations ranging from harassment to rape, the #MeToo campaign has seen a deluge of accusations topple men from powerful positions in a number of industries including Hollywood, the media and politics.

In February, allegations of domestic abuse led two Trump staffers to resign. The Republican leader came under fire for lamenting the "shattered" lives of those accused, saying the allegations could be false.

The 2016 presidential campaign that launched Trump to the White House saw the unearthing of an infamous "Access Hollywood" tape in which the real estate tycoon bragged about groping women.

"I don't even wait," Trump says in the clip. "And when you're a star, they let you do it, you can do anything. Grab them by the pussy."